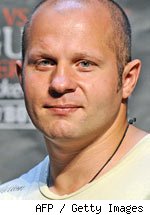 A Tuesday report from the Los Angeles Times that the UFC and Fedor Emelianenko are finalizing a deal has been denied by a representative from Fedor's promotion, M-1 Global, suggesting that the best heavyweight in MMA will not, in fact, be signing on to fight in the Octagon any time soon.

"I can give you a guarantee it's not accurate," Apy Echteld of M-1 Global told Josh Gross of SI.com.

As we noted when the Times initially reported that Fedor and the UFC were close to a deal, M-1 has scheduled a press conference for Wednesday at which Fedor will address the media. It's hard to see how that squares with the Times report that the UFC will announce the signing of Fedor on Friday.