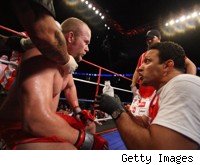 Former UFC light heavyweight Tim Boetsch will be back in the cage on Aug. 15 in a matchup against IFL veteran Aaron Stark at King of the Cage "Thunderstruck" in Everett, Washington.

In his UFC debut at UFC 81, Boetsch (8-3) became an immediate fan favorite with his dismantling of David Heath on ten days' notice. But one win and two losses later were enough for him to be handed his walking papers after UFC 96 in March.

In this interview with FanHouse, Boetsch talks about his upcoming fight, his new training camp with Matt Hume at AMC Kickboxing & Pankration and his possible future with either Strikeforce or a UFC return.

FanHouse: What are your thoughts on Aaron Stark?

Tim Boetsch: I think it's gonna be a good fight. He's very tough, he's got a pretty good record. He's good at what he does. He's a strong wrestler, he's very good at controlling his opponents. Very good at scoring points and winning rounds. I expect it to be a tough fight. With that being said, I expect to come out on top. I'm looking forward to it.

Stark and your last opponent Jason Brilz are both wrestlers who are dangerous submission artists. Do you think they are rather similar?

Yeah. Actually that was my first initial reaction, was this is going to be the exact same fight than the last one as far as opponents go. They're bringing me pretty much the exact same skill set into the fight. Jason Brilz maybe has a little more experience in MMA but style-wise I think they're pretty much exactly the same.

So are you going to approach this fight differently than your last?

Yeah, I plan on winning this one. (Laughs)

What did you feel went wrong then against Brilz?

Honestly it was just one of those nights. Mentally I didn't show up. I had a terrific training camp. I was in really good shape. I went into that fight more confident – my confidence level was higher than it was in any point of my career. It was just one of those things; it's really hard to explain what happened, but somewhere between the locker room and walking into the Octagon, something went haywire in my head I guess. I wasn't reacting and I was doing what I was trained to do. It's just kinda bizarre to explain what happened but I don't expect that to happen again this time.

Your former roommate and good friend Mike Ciesnolevicz holds a win over him in the IFL. Have you approached him to help you out?

Yeah I think that was the first phone call I made when I heard I (would be fighting Stark). I knew Aaron had fought in the IFL and I was trying to think back to how I knew the name and then I remembered Mike fought him, so Mike was the first guy I called when I found out I was fighting Aaron to see what he thought. He agreed the guy was a tough opponent, but his game plan or strategy hasn't changed throughout his MMA career. He's looking for that take down, looking to control guys on bottom and hopefully they make a mistake and he can capitalize with a submission or pound him out. He doesn't seem to like to exchange on the feet too much so I'm definitely going to take that into account. I'm just looking forward to get back in there and get back on a winning streak here.

Can you tell me more about where you're training?

Actually I just started working with Matt Hume out here in Washington, which is kinda where I'm setting up base for my fights now. I've got some real strong training partners out here and I like the way Matt does things. I think this kind of our first run at a training camp for a fight so we'll see how it goes, but I have a good feeling about this camp and I plan on sticking around here after this fight.

How did you connect with Matt Hume?

My manager Monte Cox is good friends with Matt, and obviously he's Rich Franklin's manager and Rich trains out here so he called me a couple months ago that Rich was training for Wanderlei [Silva] so I came out here and did some training out here then and I liked what I saw and I wanted to give it a shot with my own fight prep out here. That's how we made that connection.

And previously you trained out of your own gym and you traveled around different camps? I read that you've trained in Las Vegas...

Yeah that was just a stint, a weeklong camp out there. I went out with [Robert] Drysdale and Frank Mir. I've trained with [Mark] Dellagrote up in Boston, Marcus Davis and those guys up there. I've been around training at a bunch of camps. Been to Iowa at Miletich where Mike C trains. Seems like this is the best fit for me out here in Washington. Even thought it's a long ways from home, they definitely know what's going on out here and can provide everything you need so [it's] definitely a good camp.

You're based in Pennsylvania, all the way on the other side of country. How would you living situation be out here?

I'm fortunate enough to be friends with some guys out here who train. I'm staying with one of the fighters that lives out here so he's nice enough to let me crash in his living room (chuckles) for the duration of the camp. So that's the setup I have for this one but down the road, who knows, when we get rollin' and get back into some bigger fights, bigger money I might be able to afford place out here on my own, but not taking too big of a step yet.

About the bigger fights, have you spoken to Strikeforce or the UFC for a possible return?

Yeah, even though I felt kinda weird about being cut by the UFC after that last fight, I can say we left on good terms. Joe and Dana both expressed to me, it sounded like they would be having me back, get a couple wins or whatever. It just seemed that they were heavy in contracts in the light-heavyweight division and some reason my number came up to get cut. But we're also, Monte's talking with Strikeforce and I guess they are going to have a bunch of shows last year. So that's definitely a possibility that I'm going to go over there and get some more experience and that organization is going and they got some great fighters over there and I'd definitely be happy to be part of that too. I'm pretty willing to go wherever I need to go right now and keep fighting.