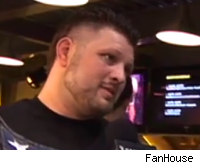 Roy Nelson may be one of the most decorated fighters to ever appear on "The Ultimate Fighter" reality show. The former IFL heavyweight champion, who holds a 13-4 professional MMA record, will be one of the 16 fighters competing for a UFC contract on the tenth season of TUF. The series premieres September 16 on Spike TV.

FanHouse recently spoke to "Big Country" about why he decided to appear on the show and living with Kimbo Slice. Check out the full video interview below.