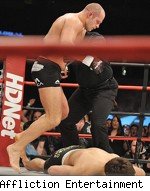 Yes, as I noted on Friday, Fedor was on a plane to Los Angeles at the time that Affliction pulled the plug on the show, and Fedor's promotion, M-1, released a statement Saturday saying that Fedor knew nothing about it until he found out at the airport, several hours after every MMA web site had weighed in on it.

The cancellation took our company completely by surprise, as Fedor Emelianenko, M-1 Challenge fighter Mikahil Zayats, and a traveling party of 35 people from Russia consisting of Fedor's trainers, friends, family, as well as M-1 support personnel were all on a plane en route to Anaheim.

Additionally, Fedor did not learn of the cancellation until arriving at the airport and informed directly by M-1 legal counsel.

Following the California State Athletic Commission's decision not to license Josh Barnett earlier in the week, M-1 Global was confident that a suitable replacement would be found. Fedor was ready, willing, and able to compete against whomever Affliction determined was the most qualified candidate amongst an extensive list of potential replacements.

M-1 Global understands and shares the disappointment being expressed by many fans that Fedor will not be able to compete on Aug. 1 as scheduled. However, we will work to ensure that Fedor returns to active competition as soon as possible.

I hope they're serious about Fedor returning as soon as possible. Strikeforce has a card on August 15 and M-1 has a card on August 28, and M-1 should match Fedor up with a legitimate hevyweight opponent -- perhaps Brett Rogers or Fabricio Werdum -- on one of those cards. Or they should finally settle their differences with the UFC and get Fedor into the Octagon.But the best fighter in the world needs to fight, and he needs to fight soon.