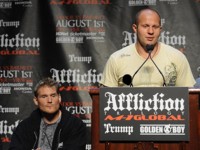 The last-minute unavailability of Josh Barnett and the lack of time to promote a new fight has led to the cancellation of Affliction "Trilogy," the third offering from the event-by-event existing promotion.

FanHouse examines the winners and losers out of the "Trilogy" cancellation.

Adam Smith, often called the father of modern economics, would tell you competition is a good thing. UFC president Dana White might say otherwise when addressing Affliction... Remember the UFC video blog with White carrying around a tombstone of the logos of the IFL, EliteXC and Affliction with a big smile on his face?
Depending on the ramifications of the fighters' contracts in light of the cancellation, this could open up a new pool of fighters for the UFC to sign.

Vitor Belfort vs. Anderson Silva, anyone?

And as FanHouse's own MDS pointed out, the megafight between Fedor Emelianenko and Brock Lesnar just became more likely. For Fedor to be considered the undisputed number one heavyweight in the world, Lesnar is the fight (besides Barnett) that makes most sense. Fedor could clean out the rest of the heavyweights out there but he'll for the near future be compared to Lesnar.

It's a little too early to tell but with Affliction's friendship with Strikeforce and its partnership with M-1, the "Trilogy" competitors left without fights could be sent to improve its cards on Aug. 15 and Aug. 28, respectively.

Now that Affliction clothing is allowed in the UFC again, that's one extra option fighters have as a sponsor.

Even if you're not the biggest Affliction supporter, there should be no celebration for the fact that up to 24 fighters will be missing out on a pay day. Each fighter trains six to eight weeks, making sacrifices in preparation for a fight only to be called off eight days before fight night. If the event is rescheduled, that's still time missing. During this time, fighters could have provided for themselves elsewhere, or simply taken the time relax with their families. At the end of the day, one less event means one less pay check and one less outlet for the athletes to showcase their skills and hard work.

Affliction with the Barnett-Fedor main event was arguably as good on paper as UFC 100, and even without Barnett, had a solid supporting card. Fans miss out on fights involving Fedor, Renato "Babalu" Sobral, Vitor Belfort, Gegard Mousasi, Jorge Santiago and Takanori Gomi which could all have shaken up the world top 10 rankings.

Before the event cancellation, Fedor was arguably the biggest loser with the absence of Barnett from the card. Barnett is practically the one heavyweight on the world top 10 rankings not tied to the UFC that was worth beating for Fedor. A victory by Fedor over Barnett would have been his sixth against a former UFC champion and would buy Fedor more time as the greatest heavyweight without having to go to the UFC.

Like Sean Sherk, Josh Barnett's name could potentially for the remainder of his career be attached to steroids. Already carrying the stigma from his 2002 positive test following his UFC title win over Randy Couture, this current failed test comes at the time of what could have been the biggest fight of his career. While Barnett wasn't issued a suspension and can conceivably be licensed to fight elsewhere in the US (it all depends on the respective commissions), his reputation as a world-class athlete takes a hit. Barnett will likely have to return to Japan. Not that it's a bad thing for the charismatic and talented heavyweight, he's well-loved there.

Gegard Mousasi, who would have made his US debut, is looking for to make his mark as a 205-pounder after a solid run as a middleweight. Now he goes back to DREAM where's he's slated to take on Rameau Thierry Sokoudjou in an open-weight fight. As entertaining as a fight that may be, it won't put him as candidate on top 10 lists as much as win over Sobral might have.

As of last month Vitor Belfort was training for the opportunity to arguably claim the spot as the top non-UFC middleweight in the world with a "w" over Jorge Santiago. He then visited the possibility of facing Fedor, a no-lose situation for Belfort. If he beats Fedor, he just defeated one of the greatest heavyweights ever, and if he loses, he was a middleweight moving up to two weight classes against the No. 1 heavyweight in the world.

Any opponent of Fedor has much more to gain than to lose. Brett Rogers in particular, according to his manager, could have earned anywhere from $500,000 to $800,000. Not too shabby for someone who last year was a Sam's Club tire repair man.

Coming into "Trilogy," the future of Affliction was unclear, and the abrupt cancellation has sealed the organization's fate.