Sobral on Mousasi: When I Started Fighting, He Was Still on Mother's Lap 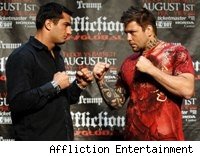 Since making his debut in 1997, Renato "Babalu" Sobral has seen more than a few hot prospects capture attention before fading away. His Aug. 1 Affliction: Trilogy opponent, Gegard Mousasi, is perhaps the latest in a long line of hyped young stars who has excited observers with his potential.

And while only time will tell if Mousasi meets the predictions that many are forecasting for him, Sobral can only concern himself with the present. And what he sees is a talented kid who is a bit short on experience.

"He's a Dream champion. He's not overrated; he's just one more guy," said Sobral, whose fight will air as one of the featured matches on the 9PM ET pay-per-view broadcast. "He's a young guy, upcoming. But when I started fighting for the first time, he was still on his mother's lap."

Such unguarded declarations are part of the reason Sobral remains such a popular fighter. Unafraid to voice his opinions and similarly fearless in competition, he brings an energy that always seems to result in exciting fights. Win or lose, he's only gone to a decision once in his last 12 bouts.


In Mousasi, he faces a rising star with a gaudy 25-2-1 record that at least partially disguises his youth. In fact, Mousasi will turn 24 on the night of the fight. Still, with wins over veterans like Denis Kang, Melvin Manhoef and Mark Hunt, he has already stamped himself as legitimate in the eyes of many. With 14 of his wins coming by TKO or KO and eight coming via submission, he's also proven himself quite well-rounded.

The 33-year-old Sobral, however, has seen and done it all in the sport. From Dan Henderson to Shogun Rua to Chuck Liddell to Fedor Emelianenko, Sobral (35-8) has stood toe-to-toe with the biggest names and best fighters in the sport. So suffice it to say, Mousasi's record does not overly impress him.

"I see a lot of holes," he said. "In striking and on the ground. A lot of holes for me to take the opportunity and finish the fight."

Regarding Emelianenko, Sobral and his team made it known they would be interested in facing him and replacing Josh Barnett, who was denied a fighter's license after testing positive for steroids in a pre-fight test. But the possibility of replacing Barnett, who Sobral calls a friend, seems increasingly unlikely.

It's no matter to Sobral.

"I fight whoever," he said. "I don't make the fights. That's not my decision; it's Tom Atencio's decision. I signed to fight Mousasi, but whatever their decision, I'll take it."

The fight is the last on Sobral's contract with Affliction, according to his manager Richard Wilner. A new deal has been discussed, but nothing will be finalized before the event.

He does, however, remain under contract to Strikeforce after winning their light-heavyweight championship last November. Earlier this year, he was expected to defend the belt against Rafael "Feijao" Cavalcante, but when the date of the match was switched, he pulled out of the fight because it was too close to the expected birth of his child. He and his wife Natasha welcomed baby Sophia into the world in late May, joining big sister Maria Fernanda.

After facing Mousasi, he expects to defend his belt, though an opponent and time has yet to be determined. In the past, he's voiced an interest in fighting ex-UFC champ and current free agent Tito Ortiz, but he seems to be past that desire.

Sobral's also trying to expand his brand. He recently opened his own gym, Gracie Barra Cerritos in Cerritos, Calif., and hopes to add a second location soon. He also signed on to be part of the upcoming EA Sports MMA video game.

During UFC 100 weekend, UFC President Dana White made no bones about his feelings on the EA game, saying anyone who signed there would never fight in the UFC again. Sobral fought in the UFC 10 times between 2000-2007 before being released for disobeying a referee in refusing to release a choke hold in a timely manner in a UFC 74 win over David Heath. And while he seems satisfied with the arc of his career, he doesn't think the door would be shut on a return to the octagon.

"Dana's said other things, too," he said. "He said [Mirko] Cro Cop will never fight in the UFC, and now he's going to come back and fight in the UFC. He said that just a couple weeks ago."

Regardless, the distant future matters little to Sobral when he has a fight directly in front of him and two young children to feed. His attention is squarely on Mousasi and the challenge he brings. He's seen prospects come and go, and he's not about to let the youngster earn a bigger name at his expense.

"Eventually, the fight's going to the ground," he says. "He wants to knock me out, I want to finish him on the ground. If I have the chance, I can knock him out, too.

"He says he's going to knock me out? I'm going to shut his mouth."