Paul Buentello on 'Trilogy': 'It's a Big Hit' 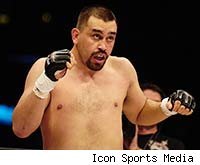 The biggest losers to come out of Affliction's announcement that they have canceled their August 1 show are not the fans, ticket holders or even the Affliction employees; it's the fighters who were scheduled to compete on the card. The ones who have been training for the last few months with a bigpay day in mind.

Just ask heavyweight Paul Buentello, who was scheduled to face Gilbert Yvel on the pay-per-view portion of the show.


Buentello said that he wasn't exactly sure why Affliction canceled it's third event, but knew that it had to do with Josh Barnett not being licensed by the California State Athletic Commission to fight on the card.

"They can't change the advertising for the show, and it's just going to cause more problems to put the show on not having Barnett and Fedor [Emelianenko] on the card," he said.

Amazingly, Buentello, who last fought in January for Affliction, believes he will not be compensated for the time he spent training for this fight.

"From what I know right now, I don't get nothing."

He also said that he holds no ill feelings towards Affliction Entertainment vice president Tom Atencio, Barnett or anyone else involved with Affliction.

"I'm not pissed off at Josh Barnett. I haven't got that far yet. I'm more, like, f**k. I've been staying away from my damn burrito eating for the damn fight. Now I'm going to f**king eat all the God da*n burritos I want today."

And as far as the rumors that this may signal the end of Affliction's days of promoting MMA events, Buentello said he knows just as much as the rest of us.

"[Atencio] said they just got to put it all back together and see what they could do. From what I understand, I still have a fight left on my contract with Affliction. So, I don't know what's going to happen. I don't understand the politics that deeply. ...Right now, I got to go to the unemployment line, I guess.

"Sh*t happens. I just hate to be in the middle of it."

Buentello said that he has not been contacted by anyone to fight for Strikeforce on August 15.