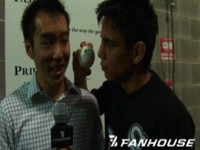 WEC bantamweight champion Miguel Torres came out firing in his ceremonial first pitch Thursday afternoon at the White Sox game in Chicago, and FanHouse was on hand to catch up with Torres to talk about his Aug. 9 title defense at WEC 42 against undefeated challenger Brian Bowles.

In between attempting to make me mispronounce Bowles' last name for laughs, and touting the performance-enhancing benefits of tortillas, Torres explains why he will retain his belt for a fourth consecutive time.

Check out the full video below.

Quick Hit: Torres' pitch connected with the catcher past the plate (which rarely happens, a White Sox staffer told me), and his accuracy turned out to be a prelude to the 18th perfect game ever in Major League History.