Jon Fitch Talks Facial Hair, Brock Lesnar and Who He Would 'Love' to Face Next 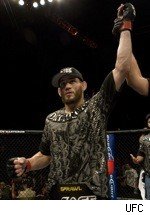 The last time we spoke to Jon Fitch he talked about getting engaged the day after UFC 100. But that wasn't the only exciting thing to happen to him that weekend. Fitch won his second fight in a row (and 17th in 18 fights), defeating Paul Thiago via unanimous decision. The victory surely meant a lot to Fitch because Thiago had shockingly defeated his American Kickboxing Academy team member, Josh Koscheck, in February.

FanHouse spoke to Fitch about what's next for him and the funky goatee he sported on ESPN.com's MMA Live after the bout. The full interview is below.

Ariel Helwani: I saw you on ESPN.com's MMA Live after your fight, and noticed that you shaved your beard into some kind of unique goatee. Why did you decide to shave between the fight and the appearance?
Jon Fitch: I always shave after my fights like that a little bit as a disguise so I can sneak out of the fights and the arena without being noticed by anybody. So yeah, it's strange but people don't recognize me when I don't have the beard. So if I have a funny beard they definitely won't recognize me. It'll get me past a lot of people.

Do you actually do that after every fight?
A few times; not every time. I haven't had to because people didn't notice me before (laughs). But recently I've had to start doing that. After the [Akhiro] Gono fight [at UFC 94] I did it, and I walked into a big crowd of people and nobody even recognized me.

Wow. But did you have any reservations in doing so -- not that it wasn't a cool looking goatee -- but considering you were going to be on ESPN.com?
Well, yeah, that's the thing. We were leaving, getting ready to go and meet my girlfriend, or my fiancée now, and parents and everything after the fight, and they ran back and grabbed me. They said, 'Oh, we need you right now backstage to do MMA Live.' If they would have let me know ahead of time, I probably would have shaved it all off, and they caught me off guard.

Do you grow your beard for superstitious reasons like hockey players do?
A little bit, yeah. One of the big reasons is kind of tradition. I've always fought with one. It kind of works as like a shield a little bit. It kind of protects your face.

Some have argued that beards like the one Kimbo Slice sports should be considered illegal because they offer too much padding Do you agree?
No, I don't think it's illegal, but if it's too big then it could be a hindrance too because it could get caught up and it could cause a problem with grappling.

Well, he doesn't have to worry about that so much.
Yeah (laughs).

Where you happy with your performance in the Thiago fight?
Yeah, I mean, he's a very, very good grappler. It's hard for me to posture up and even throw anything. You know, he had wrist control, and he always had some kind of head control. So it was really hard to do any damage on the ground. You know, I think it's just the takedown came too easy, you know, so I could've kept it on the feet more than I thought. But you know, I threw one or two punches and then got in a really deep, deep position where I can get and easy takedown, and it's hard to give that up.

How tight was his guillotine choke in the first round?
I was completely comfortable through all his chokes in that first round. He couldn't really get too much pressure and I had him pinned on the fence so that he couldn't maneuver very well. I was in a comfortable spot.

Were you at all disappointed that you couldn't finish him?
Yeah, I mean, I just never like to go into decisions. And my last two fights have been all decisions, so you know, I'm not real happy with that part of my performance. I think technically I did good throughout the fight, but I'm just not happy with winning decisions.

How frustrating was it to be forced to fight after the Brock Lesnar-Frank Mir bout?
You know, it kind of sucked, because basically we warmed up on three separate occasions. You know, the first time I thought I was going out, and then after the GSP fight I thought I was going out. So, you know, I warmed up again for that, and then they said, 'No.' Then I had to warm up again for after the Lesnar-Mir fight. So I mean, it just kind of taxing mentally a little bit. But I mean, I'm a veteran so I've been through stuff like that before. It wasn't too bad.

Considering everything that happened leading up to that point, did you feel as though the crowd was exhausted by the time your fight started?
Yeah, that was actually a first for me: people actually leaving the arena while I was fighting. That's never ever happened before (laughs).

Did that bother you?
No, I just made a mental note, you know, that this is probably something you don't experience too often.

Were you bothered by the way Lesnar acted after his victory?
Well, I mean, he still is new to the sport. So, you know, he doesn't exactly understand everything about it, and how the fans feel about certain things. You know, that stuff flies in the pro wrestling department but I think we have a higher class of fans in MMA; I'd like to think. So, I think he's just got to adjust a little bit and he'll be alright. ... I don't think it was something intentional. I think it was just ... he's still got to shake some of that pro wrestling because he was doing it for a while. I'm sure it becomes pretty automatic once you're in front of a big crowd again to snap back into the old ways.

Were you impressed with Georges St-Pierre's performance against Thiago Alves, especially considering he injured his groin midway through the fight?
Yeah, I think he was mounting, you know, it was starting to build, and then it kind of flattened out in the third, I think, when he pulled his groin. I think he was possibly working on his way towards finishing that fight but just kind of got thrown off guard with that injury, and had to kind of play it safe a little bit.

It seems as though the winner of the Martin Kampmann vs. Mike Swick fight at UFC 103 is going to get a shot at the welterweight title. Swick is a teammate of yours at American Kickboxing Academy, and I know you have said that you will never fight another AKA member. Could this situation possibly put you in a difficult position down the road?
Well, he'll have to fight somebody else, and if he beats somebody else, there's still good fights for me to have, and there's a lot of good guys for me at 170, and there's always fights to be had there. So I don't think there's a real problem.

If he does win the title, would you ever consider moving up to middleweight?
It may be a possibility if he won it and defended it multiple times. I mean, that's always a consideration; moving up a weight class and making a run at a different title.

So you don't feel conflicted in any way about this situation?
I want the best for my teammates and my friends, and still, there's plenty of good fights to be had out there. It's not like if [Swick] wins the belt my entire fighting career is over. There's a number of guys that I could fight and could be happy fighting at 170 in the UFC.

Is there a guy in particular that you'd like to fight next?
No, anybody right now. I still have to put myself in that proven role that I deserve another title shot. So I'm looking for a tough guy, a tough contender, somebody who I can really showcase myself and abilities as being somebody who can be a champ.

I'm guessing they haven't spoken to you about anyone just yet?
No, I haven't heard anything.

How about a fight against Matt Hughes? That would make sense to me.
That would be good. I would love that fight