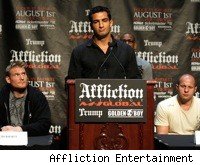 Gegard Mousasi has never fought in the United States before, and he was anxiously awaiting his opportunity to do so on August 1. He'll now have to wait a little longer.

Mousasi (25-2-1) was scheduled to face Renato Sobral on the undercard of the now-canceled Affliction: Trilogy. And while he has made a great name for himself overseas, this fight was supposed to be his official coming-out party in America. With that in mind, you can understand why he's a little upset about this news.

"Well, what can I say. It's ridiculous because one idiot we all have to pay for that. F*ck it. Maybe I ... I don't know. Every time ... Maybe I'll go to the UFC. It's ridiculous that this has to happen. I've been preparing for weeks now."


Mousasi is scheduled to face Rameau Thierry Sokoudjou (6-4) in the semifinals of DREAM's Super Hulk Tournament on Oct. 6, so he may have to hold off on his UFC plans for the time being.