Dana White: Tito Ortiz Returning to UFC Is 'a Possibility' 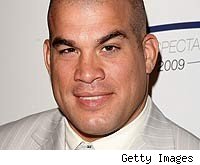 Former UFC light heavyweight champion Tito Ortiz has ended his feud with UFC President Dana White, and White suggested on Twitter Friday that Ortiz would be welcomed back into the Octagon. But in a radio appearance later on Friday, White would say only that Ortiz returning to the Ultimate Fighting Championship is "a possibility."

"Tito and I have been talking, and we've been trying to see if we can figure things out," White said on ESPN Radio 1100 in Las Vegas. "Tito and I have some issues. We both need to grow up, and we'll see if we have."

White said Ortiz is healthy after taking 14 months off.

"Tito just had major back surgery," White said. "He feels good since he had the surgery. So we'll see if he can come back."

And so all indications are that Ortiz will be back in the Octagon soon. But the official announcement hasn't come yet.