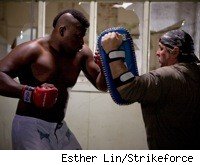 According to Brett Rogers' manager and trainer, Mike Reilly, the Strikeforce heavyweight had agreed to a deal that would pay him somewhere in the ballpark of $500,000 to $800,000 to fight Fedor Emelianenko on the now-canceled "Affliction: Trilogy" card. Unfortunately for Rogers, who recently left his job at Sam's Club to train MMA full-time, the match-up never materialized.
More: Affliction, UFC Bury the Hatchet | MMA Mailbag

"My understanding was that for the most part there was approval for it," Reilly said. "I feel like we had very good support from our promotion, and we had a lot of interest from Affliction, and obviously a lot of interest from Fedor's camp. They had agreed to it. We negotiated a deal that I had thought Affliction and Fedor's camp thought was very agreeable to work with.

"... Our first response was that any fight that we would agree to take would have to be approved of and would have to be in the interest of Strikeforce and Showtime. You know, that is our home; that is who we work for; that's where our loyalty lies."

Reilly said that Strikeforce founder and CEO Scott Coker did not stand in the way of this fight from happening.

"He called me and talked to me and said he was pushing for us," Reilly said. "You know, Scott has always been very honest and very straightforward with us and very upfront. You know, obviously Scott wants to see this fight happen, and I'm sure he would like to see it happen in Strikeforce; we'd like to see it happen in Strikeforce. But he certainly wasn't standing in the way. He wasn't an obstruction to this happening as far as I know and from what Scott told me.

"... I don't know who exactly said no. Like I said, we had good support to go forward with the fight and encouragement from our employer. We never got the feeling that Strikeforce was actually standing in the way of it happening, per se. I think it's a lot more complicated than that. It certainly wasn't one person standing up and saying, 'No, you can't do this.' I think that there was just a lot of complexity to try and put something together in a 48-hour period. And I think that the more people looked at this and realized that trying to rush this forward and trying to do this so fast was wasting a greater potential to really capitalize on two great athletes meeting later down the road."

Reilly added that Rogers currently weighs 290 pounds, and that Emelianenko had agreed to face him at an undisclosed catchweight. And while he was never specifically told that the fate of "Affliction: Trilogy" rested on Rogers shoulders, he believed this was the only main event Affliction wanted to make.

"Not to talk bad about anybody else, but my feeling was that if they didn't get a deal done with Brett very quickly that they would have to cancel their show. I didn't really see any of the other options they had as being main events"

Despite the fact that Rogers wasn't in top fighting shape, Reilly said "The Grim" was eager to take on the biggest challenge of his young career.

Reilly added that Rogers would like to return to action in October, and he believes that being included in the Fedor sweepstakes can only be seen as a positive for the 10-0 fighter.

"The real cool thing about this was that Fedor mentioned Brett by name. You know, Brett doesn't get, in my opinion, I don't feel like Brett gets the respect from the fans or from a lot of the press that he deserves. ... I just remember the UFC passing on him before he went to Elite, and I was taking that as a little bit of a shot because he knocked out everybody he has fought and he has walked a tough road.

"... We weren't able to have this great opportunity, so guess what? The next guy, he's gotta f**king pay for it then."