Josh Barnett: 'I Never Once Thought There Would Be A Problem' 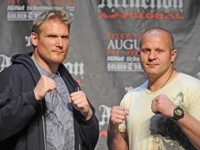 Josh Barnett believed there would be no reason for any issues when he provided the California athletic commission with a urine sample on June 25, thinking it was not a random drug test, but a routine sample in order to receive his license to fight.

"Many of you are wondering what's happening," Barnett wrote in the early hours of Thursday morning on his MySpace blog. "What I can say is that when applying for my license, the CSAC asked for me to submit a urine sample for testing prior to granting my license as they do with everyone, I believe. It was not a random test. I had no reason to believe there would be any issues and went in to submit my sample at the earliest possible opportunity on June 25th. I never once thought there would be a problem."

But unfortunately for Barnett, he was the first-ever fighter selected by the California commission for a random drug test. Random drug tests are conducted for fighters in Las Vegas events through the Nevada state athletic commission, but never before in California.

The sample, tested at the World Anti-Doping Agency lab in UCLA, was revealed Wednesday by the California athletic commission to have traces of 2a-methyl-5a-androstan-3a-ol-17-one, an anabolic steroid.

While Barnett did not specifically deny the use of performance-enhancing drugs in his statement, he said he plans to exercise his right to appeal the denial of his license.

"My representatives and I are working to gather as much info as possible and handle this situation as best as we can," Barnett continued. "I am embarrassed and want for nothing more than to resolve this issue and receive a license from the State of California as I have done many times already and for other states as well."

As FanHouse reported yesterday, a second sample provided on June 25 is currently being tested to validate the first positive test sample.