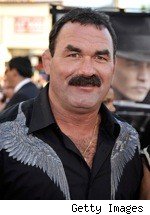 Leave it to Don Frye to make sense of this whole Josh Barnett/Affliction situation. Or not.

The MMA veteran spoke to Fight Network Radio Thursday about Barnett's positive steroid test, but chose to lay the blame on the California State Athletic Commission instead:

"Look at what the hell is going on in California with their athletic commission. What a bunch of amateurs. You know, I mean, they're suspending Josh Barnett for taking a drug, you know, and he can be making the state a million dollars by fighting. But they're going to suspend his ass when they're five billion dollars in debt. Where's the sense in that? You know, that's insane. That's how goofy we've gotten.


"I mean, did they give everyone a drug test at the Michael Jackson memorial show? That was paid by the city of LA. This guy's making the state a million dollars minimum, and they're suspending him, yet you have all these illegal aliens coming across sucking money out of the country. We cow tow to them."


The 43-year-old Frye is still very active in his MMA career. He last fought in May, and is scheduled to face Muhammad Lawal on August 28 at "M-1 presents Breakthrough."

Guess where that fight is taking place? Los Angeles. As in Los Angeles, Calif. Needless to say, it will be interesting to see if the CSAC chooses to randomly test Frye before that fight in light of these comments.