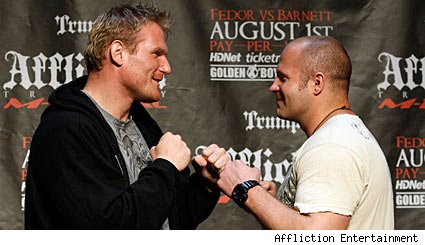 Tom Atencio, the head of the Affliction MMA promotion, confirmed to FanHouse on Wednesday morning that Josh Barnett has been pulled out of his scheduled August 1 heavyweight title fight with Fedor Emelianenko. But Atencio said he still expects the Affliction Trilogy card to take place as scheduled.

Atencio said Barnett failed a drug test and therefore the California State Athletic Commission will not permit him to fight.

"He tested positive for a banned substance," Atencio said of Barnett. "The athletic commission will not reinstate his license."

When asked if the August 1 MMA card was off, Atencio said only, "Him and Fedor is off."

Asked whether the Affliction: Trilogy card at the Honda Center in Anaheim was still going on as planned on August 1, Atencio answered, "At this point, yes."

Atencio gave a terse "no comment" when asked about a Sherdog report that Vitor Belfort and Bobby Lashley were the two potential opponents for Fedor on August 1. He also declined to speculate on whether a deal could be worked out to have Fabricio Werdum, whose August 15 fight with Alistair Overeem was canceled yesterday, might be Fedor's opponent.

When asked what he'd like to say to MMA fans, Atencio answered, "Just look for updates. ... I'm working on getting the best replacement possible."