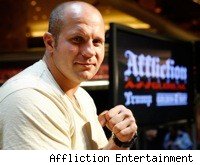 Affliction is scrambling to find a new opponent to face Fedor Emelianenko on August 1. Here's the latest based on discussions with several sources.

The organization is looking at four potential opponents right now: Vitor Belfort, Bobby Lashley, Brett Rogers and Ricardo Arona. They believe one of those fighters will take the fight on short notice.

Lashley's manager, Greg Bloom, told FanHouse Wednesday morning that he is not considering accepting the fight.

FanHouse left a message for Rogers' manager, Mike Reilly, but has yet to hear back from him. Reilly told Fanhouse Tuesday that Rogers only wants to fight in October, but that was before this news broke.

Belfort, who is already scheduled to face Jorge Santiago on the card, told Tatame in January, that he would love to fight Emelianenko in the future.

"I want to make a fight against Fedor (Emelianenko), because my category doesn't have anyone in Affliction yet. I think it'd be quite interesting, as well as Matt (Lindland) fought him. I never thought he was unbeatable, but he's very strategic and the way to beat him is striking up and then go to the ground. ... It doesn't need to be for the belt, it can be a normal fight, simply for the challenge, I like that... Although I have to lose 20 pounds to the category (middleweight), I see that I'm very strong and technical, I think it'd be a challenge to fight Fedor, an opportunity, as we are in the same event. I'm a fast guy. Although he has a strong hand, I train with hard guys and it wouldn't be a surprise. He's a great fighter, but there are ways to beat him and I believe that."

And then there's Arona, who hasn't fought since April 2007 when he lost to Rameau Thierry Sokoudjou. The former PRIDE star is reportedly scheduled to fight on September 12 for the Brazilian organization, Bitetti Combat, so he may be in fighting shape.

One thing's for certain, though: Affliction is not planning on canceling its third show. Stay tuned.