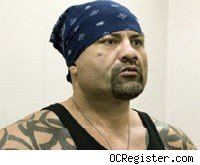 Here it is: incontrovertible proof that Kimo Leopoldo is in fact alive and well.

On Tuesday, as you probably know by now, it was reported by numerous news outlets that Leopoldo had died of a heart attack, but after a few hours of the story exploding in cyberspace, it was eventually debunked by Yahoo writer Kevin Iole, who was able to confirm through Leopoldo's attorney that he was indeed was alive and well. Leopoldo appeared later that night at the Orange County Sheriff's Department to address the rumors.

The video after the jump comes from The Orange County Register, which notes in the accompanying article, "Many MMA Web sites and news organizations, including USA Today, the New York Daily News and TMZ.com, jumped in the ring, spreading news of Leopoldo's supposed death in Orange County."

The Register's writers and editors apparently have short memories, as they failed to note that they also ran the original rumor in a story headlined, "Ultimate fighter reportedly dies after court appearance." That story has since been removed from their Web site.

Many other reputable MMA news sites, including FanHouse, MMAJunkie and Yahoo, never published the initial rumors because they could not be substantiated. Even a relative of Kimo's that we spoke with was unsure of the truth for most of the day, unable to reach him.

At least an ugly day for the media's credibility results in a happy ending for the Leopoldo family.