Josh Barnett vs. Fedor Emelianenko In Danger of Being Canceled 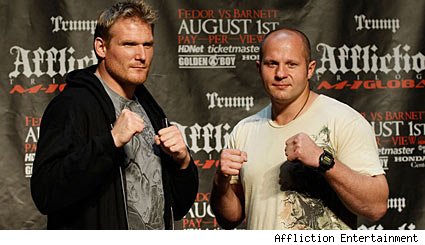 In what would be a stunning blow both to the Affliction MMA promotion and to fans who want to see two of the best fighters in the world, the Josh Barnett vs. Fedor Emelianenko heavyweight title fight on the August 1 Affliction Trilogy show is reportedly in danger of being canceled because the California State Athletic Commission may decline to grant Barnett a license to fight.

Sherdog.com is reporting that Barnett could be barred from fighting because of "a positive test result." Sherdog quotes Barnett saying the following:

"I took my test three weeks ago. I would have thought I would have heard something by now," Barnett told Sherdog.com. "No matter what happens with this, I can assure you I will clear my name. This will not be something that I am defined by."


Barnett is no stranger to failed drug tests. In 2002 he beat Randy Couture to win the UFC heavyweight title, only to be stripped of the title and suspended for a positive test for performance-enhancing drugs. Barnett has steadfastly denied ever using PEDs.

Stunningly, Sherdog reports that professional wrestler Bobby Lashley may also be offered the opportunity to fight Fedor. That would not be a competitive match-up, and it seems far-fetched.If Barnett cannot fight, the most likely scenario is that Vitor Belfort will fight Fedor in the main event.

UPDATE: Lashley's manager told FanHouse that Lashley is not being considered to fight Fedor.