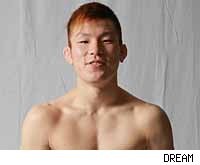 Shinya Aoki will face champion Joachim Hansen for the DREAM lightweight title at DREAM.11 on Oct. 6 in Yokohama, Japan.

The championship bout will be the decider in what is now a best-of-three series which began New Year's Eve 2006 at PRIDE Shockwave. Aoki (21-4) won the encounter with a gogoplata 2:24 into the first round, and in the process popularized the submission maneuver. But when the two bumped into each other in the finals of last year's DREAM lightweight tournament, Hansen (19-7-1) exacted revenge by ground and pounding Aoki to capture the promotion's title. To Aoki's credit, though, he had gone through a full 15 minutes with Caol Uno earlier in the evening while Hansen won his reserve fight in two minutes and 33 seconds.

Since the two last met, Aoki has gone 4-1, with his one loss in the welterweight division against Hayato "Mach" Sakurai. Hansen, on the other hand, has not competed since the July 2008 bout. He was scheduled on New Year's Eve but was forced out with an injury the day of the event.

Although Hansen is the one putting a title on the line in the fight, he has much to gain. Aoki is still ranked higher than Hansen due to Aoki's submission victory over Eddie Alvarez on New Year's Eve. By winning the rubber match, Hansen would make a great case for being the second or third best lightweight in the world depending on the outcome of the UFC 101 bout between UFC lightweight champion BJ Penn and Kenny Florian.

DREAM 11, which will be the promotion's last before its New Year's Eve event, will also feature the semifinals and final of the Featherweight GP and the semifinals of the Super Hulk tournament.