Michael Bisping: Dan Henderson Did What I Would Have Done at UFC 100 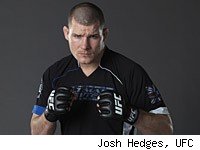 Dan Henderson has been criticized in some quarters for punching an unconscious Michael Bisping at the end of their fight at UFC 100, and then saying he landed the punch just to shut Bisping up. But Bisping says if he'd had the opportunity, he would have done the exact same thing to Henderson.

"I know there's been some controversy, but I don't have any bad feelings about him landing that second shot when I was on the ground. That MMA, you keep hitting until the ref pulls you off. I would have done the same to Dan," he laughs. "And, anyway, I didn't feel a thing so it made no difference to me."

"Fair play to him, he caught me and knocked me out. Everyone saw it. It is a setback, I am pissed off, I was close to a title shot but I will be back. The worst has [now] happened to me. It doesn't get any worse than my last fight, so what's to worry about next time?

"If anything, this will make me more aggressive in my next fight - I feel really sorry for whomever I fight next. I am a little embarrassed, I'm pissed off, and I just want to fight as soon as can be."


I agree with Bisping that Henderson didn't do anything wrong in hitting Bisping while he was down: The bottom line in MMA is that you keep fighting until the ref instructs you to stop.

But where I have a problem with Henderson is in the comments he made afterward. For Henderson to say the final punch was just to shut Bisping up is, to me, crossing a line. Henderson is usually a quiet, thoughtful guy, and I'm betting he wishes he could have that statement back.