MMA Twitter Mailbag: Another Belt for Silva? MMA on the Web, Gracie Clan 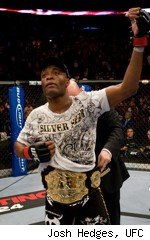 Today's MMA twitter mailbag features questions about the first family of Brazilian jiu jitsu and the MMA blogosphere. But we start with an intriguing question about whether Anderson Silva could put his UFC middleweight title aside and earn a shot at the light heavyweight belt if he beats Forrest Griffin at UFC 101.

If Silva beats Griffin, would it make sense to give him the Lyoto Machida/ Shogun Rua winner, and do interim MW title w/ Dan Henderson vs Demian Maia/Nate Marquardt? --Nitrayn
Interesting idea, but I don't think so. Although Silva is good enough to challenge for the light heavyweight belt, the scenario you lay out would cause a lot of headaches for the UFC.

For starters, Silva and Machida are friends who have said they won't fight each other. UFC President Dana White and owner Lorenzo Fertitta have said they won't allow fighters to dictate their opponents, but I don't think they want to have a stare down with Silva and Machida over the issue. So declaring Silva the No. 1 light heavyweight contender while Machida has the belt isn't a good idea.

I also don't think the UFC wants to put Silva's middleweight belt on hold and declare an interim champion in his absence. The UFC would much rather see Silva defend his belt against Henderson than Henderson fight Maia or Marquardt for what would be, as Brock Lesnar would say, a make-believe belt. And with Machida vs. Rua not taking place until October 24, I don't think the UFC wants to wait that long to schedule the Spider's next fight, either.

I agree with you, Nitrayn, that Silva is the fighter who would present Machida or Shogun the toughest test at 205 pounds. But I think Silva's next fight after UFC 101 will be a middleweight title defense, and I think the Machida-Shogun winner will take on the Rampage Jackson-Rashad Evans winner.

I'd love to hear your thoughts about the current state of and future of the Gracie family on MMA. Are they now only the past? --PDXFighter
I wouldn't say they're only in the past, but they are mostly in the past. By my count, the Sherdog fight finder lists 19 fighters named Gracie: Carlson, Cesar, Charles, Crosley, Daniel, Gregor, Igor, Ralek, Ralph, Renzo, Rhalan, Rickson, Robin, Rodrigo, Roger, Rolles, Royce, Royler and Ryan. Royce will go down in history as the first UFC champion, and several of his kin were good fighters, but obviously, most of the Gracies' accomplishments came in the early days of MMA, when it was easier for a one-dimensional Brazilian jiu jitsu specialist to succeed in MMA.

I do think one of the aforementioned Gracies could have a promosing future in the sport: Roger Gracie, who is a very accomplished submission grappler and a 2-0 heavyweight MMA fighter. But Roger hasn't fought in more than a year and will not -- contrary to previous reports -- be fighting on the August 15 Strikeforce card.I'm not sure when we'll see him in the cage.

Oh, you meant other than the obvious? I don't really think I could pick one favorite, but I can take you through what a typical day of MMA-related web surfing is like for me.

I start on Twitter. I follow a lot of the best MMA writers, a lot of fighters and a lot of people who are just fans of the UFC, and I figure that if there's big news, I'm going to see it at Twitter first.

After that I start looking at the various MMA news sites, and the one I probably check most often is Bloody Elbow. I like Bloody Elbow for basically the same reason I like Twitter: If there's MMA news going on, I feel pretty confident that Bloody Elbow will have it. Other good sites to find out the news of the day include MMA Convert, MMA Junkie, MMA Mania and Five Ounces of Pain. I probably don't even have to mention Yahoo and Sherdog, since I think just about everyone who follows MMA is aware that those are good news sites, but overall, if you check those periodically during the day you can be sure you're not missing anything major.

Once I've got the basic news digested, I'm usually looking for something with more of a humorous slant, and that's where I like Cage Potato and Fight Linker. Both sites are able to be simultaneously hilarious and informative. That's not easy to do.

Beyond that, I like sites that do something you don't find everywhere else. Fight Opinion is a good example, with transcripts of interviews and a heavy focus on the Japanese fight scene. So is The Savage Science, where you're likely to get commentary on topics that haven't already been beaten to death at all the other sites. I also very much enjoy the statistical bent of Fight Metric, Fight Matrix and CompuStrike.

Thomas Gerbasi's writing at UFC.com is always solid, and that reminds me to mention the biggest weakness of the MMA online community: The promotions other than the UFC just don't have good web sites at all. The UFC is way, way ahead of Strikeforce, Affliction and everyone else in terms of the quality of their content on the web.

So you asked me to name my favorite MMA site and I named more than a dozen, without even mentioning all the sites I read. But I hope I've shown why picking one is so hard.