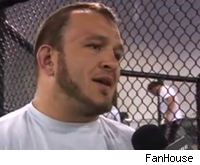 Since leaving the UFC in February 2006, Mike Whitehead has quietly compiled a 15-1 record. He last fought for Strikeforce in June, defeating Kevin Randleman via unanimous decision.

Whitehead told FanHouse that he expects to return to Strikeforce in October, but doesn't know who he will be facing. If he had his pick, Whitehead would like a shot at Strikeforce's current 205-pound champion, Renato "Babalu" Sobral, who is the only man to defeat him in over three years. He would also love to face Tito Ortiz. Find out why in our video interview below.