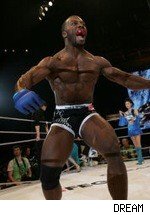 FanHouse is live-blogging for DREAM.10 Welterweight Grand Prix 2009 Final Round from the Saitama Super Arena in Saitama, Japan.

Hayato Sakurai, Marius Zaromskis, Jason High and Andre Galvao are in the running to be crowned the promotion's 168-pound champion. Also on the card is an intriguing matchup for grappling enthusiasts, a lightweight tilt pitting Vitor "Shaolin" Ribeiro against Shinya Aoki.

Round 1: Current DEEP welterweight champion Ikemoto leaps forward with hammerfists and Saffiedine steps away. The Team Quest member Saffiedine jabs and clinches, until the referee separates them. Ikemoto misses on kicks and punches. Saffiedine lands leg kicks. Ikemoto jumps forward with a short knee to engage in clinch. Ikemoto defends against a takedown. Ikemoto scores with knees to the body. The referee separates them. Saffiedine connects on more leg kicks. Ikemoto shoots with 5:49 left and they are in clinch. Ikemoto jumps forward with a punch and comes up empty. A spinning backfist also misses. Saffiedine slips on a high kick and Ikemoto enters Saffiedine's guard. Ikemoto works his ground and pound but Saffiedine is actively moving his hips to avoid the strikes. Ikemoto passes to halfguard. Saffiedine goes for a sweep but instead escapes into standing clinch. They separate and Saffiedine connects on a punch and then clips his opponent with a flying knee.

Edge: Saffiedine. The fighter out of Belgium landed cleaner strikes against the unorthodox striker.

Zaromskis comes out in full Akuma attire (including red wig) from Street Fighter. It took Sakurai three tries to make weight yesterday. Let's see if his issues with making 167.6 pounds will effect his performance.

Round 1: Zaromskis jumps forward and immediately swings with punches. Sakurai with the Thai clinch and knee. Sakurai, by the far the more composed fighter, lands a hard kick. Zaromskis lands a nice combo a throws a flying knee. Zaromskis' wild strikes are landing. Sakurai counters nicely with punches. Sakurai takes Zaromskis down at 8:03. When Sakurai stands he tries to sneak in a high kick but slips. Sakurai tags his opponent with rights. Sakurai is bleeding near his left eye. There's a lot of blood and the referee pauses the bout for the doctor examination. Shortly after the fight resumes, Zaromskis drops Sakurai with a left high kick and follows with left punches for the referee stoppage. Good stoppage to save the dazed Sakurai. Zaromskis pulls off the upset and advances to the finals.

Round 1: Galvao steps in with punches and High throws a knee. High takes Galvao down, but Galvao reverses and High also reverses to end up in Galvao's halfguard. High sits and lands punches. However he gives up his back, standing. The referee separates them. Galvao throws a lazy kick and gets dropped with a straight left. Galvao hugs a leg for a toehold and then kneebar attempt. High escapes and is put on his back in halfguard by a single-leg. Galvao climbs to take High's back. Galvao, with a body triangle locked, softens up High with punches. Galvao has mount and then back to control of High's back. High turns again and Galvao lands body shots from mount. Galvao looks for an armbar but the bell sounds.

Edge: Galvao. Good round for both fighters. High was the better standup fighter but was in survival mode in the final several minutes against a rear-naked choke.

Round 2: High hurts Galvao with a knee. Galvao pulls guard. High calls for the standup. High works uppercut and jab combos. Galvao shoots and misses. Galvao slips on a kick right into guard, and again High doesn't want to go to the ground. High's overhand left is blocked but lands on a kick to the body. Galvao counters a leg kick with a right hand. High connects on kicks to the body.

Edge: High. Since the fight didn't go to the ground, High wins round two with his striking. Tough fight to call, could go to either fighter.
High wins the split decision

Round 1: Amade misses on a huge right. Amade misses a high kick. Kikuno throws a leg kick but Amade counters with a right hand that drops Kikuno. Kikuno stands and has a big smile on his face. Very cautious are the two fighters. Kikuno still has a smile on his face. He must be a happy guy; he walked out to "We are the World" after all. The referee separates them at 7:04 and warns them for lack of action. Kikuno lands a kick to the liver. Kikuno takes Amade down directly into mount. Amade gives up his back and Kikuno pounds away with rights.

Round 1: Filho changes levels and shoots but Manhoef defends. Manhoef unloads with a flurry of punches and Filho goes for the takedown. Manhoef stuns Filho and continues with nonstop punchces. Filho is down. Manhoef rains down punches from Filho's halfguard. Manhoef stands up to allow the fight back to the feet. Manhoef with another flurry but Filho takes him down this time. Filho sets up the armbar from full mount. Manhoef taps to give Filho the much needed win. Imagine if Manhoef actually had a solid ground game; he'd be one of the best middleweights in the world.

Round 1: Taylor shoots and drags Yoon down into side control. Taylor smoothly secures Yoon's back. Yoon complains of an injury to his left leg and Taylor kindly backs off. The referee stops the fight. Replays showed that the injury probably occurred when he was taken down by Taylor.
Taylor wins via TKO (injury) - R1

Aoki is wearing shorts over his pants. Maybe MDS got to him a little.

Round 1: Aoki opens with kicks. Ribeiro sticks jabs. Lots more kicks from Aoki. Ribeiro throws out occasional 1-2s. Brief clinch and they separate. Ribeiro punches into clinch. Aoki separates with a right punch. Halfway through the first and no groundwork yet. Ribeiro catches a kick but can't follow up with a right. He has a shorter reach. The referee asks for more action. Ribeiro catches a kick and attempts the takedown, but Aoki defends. Ribeiro shoots again at 1:25 and Aoki stops it. Ribeiro swings and misses on a big overhand right. Aoki continues to land leg kicks. Aoki with a knee from plum clinch.

Round 2: Ribiero throws a jab and then a 1-2. Aoki with a leg kick. Ribeiro misses an overhand right. Aoki throws a jumping knee. Ribeiro shoots and Aoki stuffs it. Aoki lands a clean kick to the body. Ribeiro moves forward with three punches but Aoki grabs the plum clinch and throws a knee. Ribeiro scores the takedown and the fight finally goes to the ground with 2:40 remaining. Ribeiro with punches. Aoki tries the rubberguard and then back to the closed guard. Ribiero continues with punches. The bell sounds and both fighters walk off with their hands raised.

Edge: Ribeiro for his takedown and punches on the ground. Neither fighter was close to finishing and the fight did not live up to the expectations on paper.
Aoki wins via unanimous decision

Round 1: Zaromskis throws a flying knee and High catches it. High attempts to takedown Zaromskis in clinch. He fails on his first try but gets it on his second. Zaromskis kicks High off. High attempts a guillotine and Zaromskis allows the fight to go to the floor. High thinks of an armbar and Zaromskis moves away. Zaromskis lands a nasty, nasty head kick and knocks out High. High was knocked out on his feet from the kick and was hit with another right punch before he hit the floor.