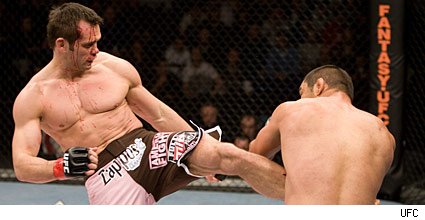 Former UFC middleweight champion Rich Franklin expects to ink a contract extension within a matter of days, he informed FanHouse via e-mail.

Franklin met with UFC President Dana White last Wednesday in Las Vegas, and though he left with nothing official, all signs are pointing to his long union with the company continuing into the future.

"I would expect I will sign a contract by the end of the week," he wrote.


Franklin (25-4) most recently defeated Wanderlei Silva by unanimous decision in the main event of UFC 99. In recent days, there has been speculation about Franklin main eventing UFC 103 in September. Though Franklin did not comment on the possibility of fighting at that event, if he did indeed sign a contract this week, it would leave eight weeks until the Sept. 19 date. Eight weeks is a standard training-camp length for most fighters.

The contract could possibly be the last one Franklin signs before calling it quits. Just prior to his most recent bout, he told FanHouse that he expects to fight until he's 36 or 37 (Franklin turns 35 in October).

Now fighting as a light-heavyweight, Franklin has been rumored as a possible opponent for Luiz Cane (10-1). The Brazilian has recently made it known he'd welcome a fight with Franklin, but if the fight materializes, it won't be an easy one for the rising star. Franklin has won three of his last four, with his only loss coming via a controversial split-decision to Dan Henderson at UFC 93.