UFC Lightweight Champ B.J. Penn the Latest to Jump Out of a Pool 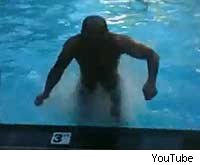 I have no idea how the ability to stand in three feet of water and do a vertical jump out of a pool became such a rite of passage for professional athletes, but UFC lightweight champion BJ Penn is the latest to do it, allegedly becoming only the third person in the world with the ability, in a video he posted to his official YouTube channel.

Chicago Bears rookie Jarron Gilbert was the first to accomplish the feat, making the jump out of a pool and posting a video that has now been viewed more than 1 million times on YouTube. Then another NFL rookie, Jason Williams of the Cowboys, claimed on Twitter that he could do it, too. I guess those are the two other people whose exclusive company Penn has joined. (Yet another NFL rookie, Redskins receiver Keith Eloi, then posted a video of himself jumping into a truck, claiming that his feat was more difficult than jumping out of a pool.)

This whole phenomenon of athletes posting their feats on YouTube is bizarre, but it's also pretty cool. Penn is undeniably a great athlete, and seeing him do things that he can do and few other people can is exactly what athletes should be using their YouTube channels for. Maybe Penn's next opponent, Kenny Florian, can come up with something to top this.