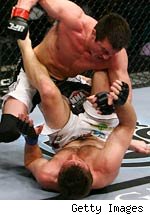 UFC middleweight contenders Yushin Okami and Chael Sonnen will meet at UFC 104 on Oct. 24 in Los Angeles, the UFC announced today on the Japanese version of its website.

Okami (23-4), who was last seen in the Octagon outpointing Dean Lister at UFC 92 in December, will be competing for his first time in 2009. He was scheduled to fight Dan Miller at UFC 98 in May but was forced out due to a knee injury. Sonnen (23-10-1), incidentally, stepped in for Okami and earned the unanimous nod over Miller.

Okami and Sonnen both excel in wrestling and can dish out ground and pound strikes. With that said, this fight can be considered a solid bet to go to a decision. Sonnen will enter the fight without a (T)KO or submission win in the past two years, and Okami in four out of his last five fights have gone the distance with his opponent.

The stakes for this fight are high, as the two have arguably been worthy of a title shot for a while now, most especially Okami, and a loss here could seriously hinder any chance for a championship bout in the near future.

UFC 104 will be headlined by Lyoto Machida defending his belt against Mauricio "Shogun" Rua.