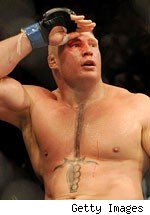 13 out of the 22 competitors at UFC 100 underwent drug testing Saturday and all passed.

The commission also told FanHouse that Lesnar, Mir, St-Pierre and Alves were the only fighters specifically selected for the test due to their participation in championship bouts. The other nine were randomly picked.

Fighters are tested for performance-enhancing drugs and drugs of abuse.