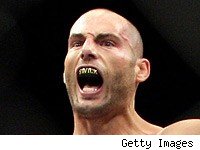 The next opponent for UFC welterweight champion Georges St. Pierre will be determined between Mike Swick and Martin Kampmann at UFC 103.

White confirmed the number one contender bout Wednesday in a formal announcement for the UFC 103 event on Sept. 19 at the American Airlines Center in Dallas, Texas.

"Mike Swick vs. Martin Kampmann could be fight of the night at UFC 103 because the winner takes on Georges St-Pierre for the welterweight title," White stated.

In the dominance of St-Pierre (19-2), the UFC finds itself in a situation similar to Anderson Silva in the middleweight division: The difficultly in promoting a realistic threat to the champ. With wins over Thiago Alves, Jon Fitch, Matt Hughes, Josh Koscheck and Karo Parisyan, the French-Canadian star has essentially wiped out the who's who of the welterweight division.

Last Saturday, Alves was supposed to be St-Pierre's toughest challenge yet - St-Pierre even said so himself - but the American Top Team fighter was clearly dominated through five rounds.

St-Pierre's next fight will be against two successful former middleweights who after a single UFC loss, found it more fitting to compete at 170 pounds. Since the move, the two have combined for a flawless record in six fights.

Kampmann (15-2) is the higher-ranked fighter of the two, picking up a split decision win in April against former WEC champion Carlos Condit. Meanwhile, Swick's (14-2) biggest win was against heavy-handed Marcus Davis at UFC 85.