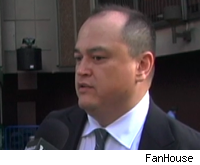 Scott Coker has been successfully promoting combat sports for over two decades, so you would think he has been to Madison Square Garden once or twice before. Think again. Amazingly, the founder and CEO of Strikeforce made his first business trip to MSG on Tuesday for the Gina Carano - Cristiane Santos press conference. The 145-pound women's title fight airs live on Showtime on August 15.

FanHouse spoke to Coker outside of MSG about everything from getting MMA legalized in New York State to the rapid growth of Strikeforce. Check out the full video interview below.