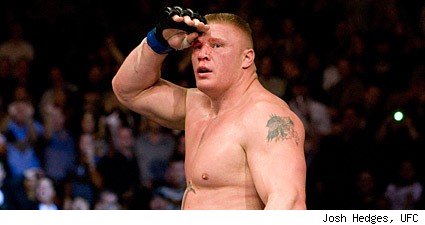 Our first MMA twitter mailbag, in which you tweet the questions and I post the answers, features discussions about UFC 100, Dana White, Fedor Emelianenko, Brock Lesnar, Bobby Lashley, the upcoming Dream 10 card, and more.

What, UFC can't handle a black hat? Love to hate works pretty well for Mayweather. -- injuryexpert
This came in response to my tweet calling Brock Lesnar's post-fight antics "unacceptable." It's not that I think the UFC can't handle a black hat, and I agree that Floyd Mayweather's bad-boy image helps him promote his fights. I just feel like Lesnar should have shown more respect to Frank Mir. You've won the fight and you've bruised and bloodied your opponent's face. You don't need to taunt him, too.

He's ensuring that people will pay money to see him lose (like Mayweather). Business decisions. -- Sportaphile
I definitely think Lesnar is the biggest pay-per-view draw in MMA, so maybe the way he conducts himself is smart for the bottom line. That doesn't mean I have to like it, though.

Um, what about Mir's words before the fight? -- jamiesanderson
Certainly, there was plenty of trash talk going in both directions, and I have no problem with that before the fight. I just think that after you've brutally beaten your opponent, it's time to put the personal animosity behind you. I felt the same way about Dan Henderson saying his final strike to an unconscious Michael Bisping was to shut him up.

What is your opinion of Mister Blackstone's article on Lesnar and MMA fans? -- Frederick
This question actually came in the comments, not from Twitter, but I wanted to answer it anyway. Obviously, Kevin Blackistone and I disagree about MMA: I like it and he doesn't. I agree with Kevin that Brock Lesnar's antics after UFC 100 crossed the line, and that those antics reflect poorly on Lesnar. But I don't think they're an indictment of the UFC, its fans or the sport of MMA. Kevin appeared on The MMA Hour the day after he wrote that column, and we had a great conversation about it. Unfortunately, the segment Kevin appeared on was erased due to technical difficulties, so you'll never get to hear it. Suffice to say, it was a spirited discussion.

UFC 100: Georges St. Pierre, a true champion. Great article. -- beewsee
Thanks for your kind words about my UFC 100 Morning After column, beewsee. St. Pierre is a great fighter and a class act all the way, and I think his performance is the biggest story of UFC 100.

Akiyama-Belcher was close. I had it for Akiyama and agree with decision, definitely don't think it was a robbery. -- kriskarkoski
I'm glad we're in agreement. I thought while watching it live that Yoshihiro Akiyama deserved to beat Alan Belcher, and I feel even more strongly about it upon reflection. I'm amazed that some people are saying Belcher was robbed. Akiyama deserved his split decision victory.

Yes it's true. Tito and Frank are Hall of Fame material. --benjotheman
It was disappointing that Tito Ortiz and Frank Shamrock weren't celebrated at UFC 100. They're two of the all-time greats.

Dana been in contact with Fedor. They butted heads before. Now UFC has to wait to Fedor's contract to expire with Affliction. -- Creinold
Dana White says he's never met Fedor Emelianenko, and I think someone needs to make that introduction. Fedor's contract with Affliction expires after his August 1 fight with Josh Barnett, and I would love to see the winner of the Fedor-Barnett fight take on Brock Lesnar for the undisputed heavyweight championship of MMA. I don't expect it to happen, though.

What about the prospects of Bobby Lashley in UFC. He should have been on TUF. Dana made BIg Country (Roy Nelson) go that route. Your thoughts? -- drsippi
I've been told that Lashley had the opportunity to be on season 10 of The Ultimate Fighter and declined. Lashley values his independence -- he wants to be able to move from promotion to promotion, and to have the flexibility to keep doing pro wrestling with TNA. The UFC wouldn't go for that, so for now they won't come to terms, but I wouldn't rule it out in the future. I think we're more likely to see Lashley in the Octagon than Fedor in the Octagon.

Let this get you hyped for Dream 10. -- Jordan Breen
Sherdog's Jordan Breen was nice enough to have me on his radio show this week, and I mentioned that I wasn't as excited about the upcoming Dream 10 card as I have been for most Dream cards. Jordan took issue with that, and I must say, the video Jordan sends along of Katsunori Kikuno vs Bu Kyung Jung is just the thing to get me more in the mood for Dream 10. That was an exciting fight that Kikuno finished with a soccer kick to the body, and on Monday Kikuno will fight Andre Dida at Dream 10. Should be a barn burner.

This also gives me an opportunity to mention something that Jordan and I touched on during our conversation on his show: Twitter has become an amazing service for MMA fans, and so has YouTube. There are a lot of great fights, like Kikuno vs. Jung and Thierry Quenneville vs. Doug Evans, that hardly anyone would have seen were it not for YouTube. The new media revolution is great for MMA fans.