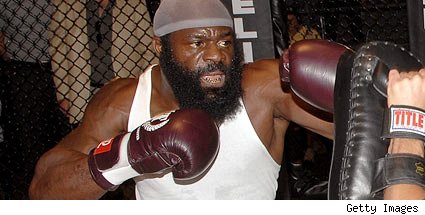 When EliteXC was in the MMA business, its president, Gary Shaw, had no qualms calling Kimbo Slice the company's "franchise player," comparing his aura to that of Mike Tyson and anointing him as an MMA great. Meanwhile, on the other side of promoter hyperbole, UFC President Dana White would rip EliteXC for its "freakshow" promotion of Slice, and throw an occasional jab at the man himself, saying at one point, "Kimbo Slice would get murdered in the UFC."

But when EliteXC closed up shop and Slice needed a new place to ply his trade, people started asking White if Kimbo could possibly find a home in the octagon. White responded that the only way for Slice to join the UFC was by going on The Ultimate Fighter. Slice called his bluff, and as a result, the UFC and broadcast partner Spike TV are privately expecting the largest ratings in the show's history.

"It was an opportunity that was presented," he told FanHouse on UFC 100 weekend. "Somebody knocked on the door and I answered. It was the opportunity to fight on the level of the UFC, to prove myself as the 'Ultimate Fighter.' That's what it's about."


For a man who was headlining major network sports events as recently as nine months ago, the opportunity also presents a major risk. Certainly, Slice had other lucrative offers from both U.S. and international promoters. TUF, which will house 16 heavyweights and begins airing on Sept. 16, was the opportunity with the most peril, but also the most potential reward.

White said Slice isn't getting any preferential treatment or pay for the show, but that if he wins the season, he'd earn a bigger contract than any other competitor.

"I respect Kimbo," White said. "He took me up on my offer and took the challenge to come on."

The 35-year-old Slice is just 3-1 in his pro MMA career, famously losing to last-minute replacement Seth Petruzelli in just 14 seconds in EliteXC's last show before the "Standgate" scandal led to its closing. While he was left in limbo for a time with EliteXC's parent company ProElite trying to sell off assets, including fighter contracts, he finally was set free in a May 13 SEC filing by ProElite. Just two weeks later, White signed him to be on the show.

"If you got something you want to get, you've gotta drive for it," Slice said. "I'm still searching for that inner me. Still searching for something. That's why I fight. And until my fighting is done, I'm going to fight. It's my passion.

"Eventually you want to put that title around your waist," he continued. "You want that gold. But you know, if it happens, it's gonna happen. Just line them up."

Slice looks no different today than the last time we saw him. He still has the trademark thick, bushy beard, sports a skullcap to cover his bald head, boasts a muscled frame that most men 10 years his junior would envy, and speaks in a quiet tone that is in direct contrast to his loud presence.

On the show, however, he'll be just one in a land of giants. His competitors include longtime MMA veterans such as ex-IFL champion Roy Nelson, ex-UFC fighters Wes Sims, Scott Junk and Mike Wessel, and unbeaten 10-0 Darrill Schoonover. Four ex-NFL players are also participating: Marcus Jones, Matt Mitrione, Brendan Schaub and Wes Shivers.

But he says he had no problems adapting to living in the TUF house among his castmastes. It's likely because of his disposition. He's surprisingly quick with a smile and laugh, and coming from a house with six children, he's not unused to a crowd.

"You've got to adapt, got to be a chameleon, adapt to your surroundings, got to blend in," he said. "You've got to know how to survive in that type of world. If you're in the forest and there are a lot of thorns around, you've got to be careful where you walk. So the opportunity to learn, watch, adapt and be creative, it was an experience. It was something I wasn't used to, something no one was used it. It was real life for everybody."

"I've gotta learn some ground s--t. I've gotta learn some wrestling s--t. I've got to prepare for mixed martial arts and get ready for it."While Slice has been out of the public eye for some time, everyone connected to the show, and everyone in the MMA industry, expects the ratings to go through the roof, mostly because of his presence, along with coaches Rashad Evans and Rampage Jackson.

Slice, who paints himself as an everyman, says people won't be surprised to see that behind the presence, he's just an ordinary dude.

"The reason why I have a large fan base and following is because people know I can relate," he said. "I can relate to that guy right there. He goes to Wal-mart? I go to Wal-mart, too. He sees me, we talk. I'm in Winn-Dixie like he's in Winn-Dixie. I don't consider myself no big-time, nothing like that. I'm just a regular guy doing what I love to do. It's an opportunity for me to feed my family and take care of everybody back at home. To make a sacrifice like I did and commit myself to something that I love, this is what I do."

He says that he's rededicated himself to the sport, that he's not just going to train when he has a fight lined up, but year-round, to be the best he can be. Now that the show has finished taping, he'll return to training with Randy Khatami, his longtime striking coach.

He knows that all eyes will be on him, to see if he sinks or swims.

It won't be the same type of pressure of holding up a company that he had in EliteXC; now it's about seeing growth as a fighter, and finding out whether the warring words of Gary Shaw or Dana White are closer to the truth. Is he a franchise player, or will he get murdered in the octagon?

"I'm still trying to get it," he said. "I still got that hunger. My fire is blazing and burning."