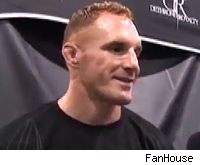 Jason MacDonald opened a lot of eyes when he first arrived to the UFC in October 2006, as his first two wins were against well-known fighters Ed Herman and Chris Leben. However since then, "The Athlete" went 3-5 inside the Octagon, most recently losing a one-sided fight to Nate Quarry in April. Following the Quarry lose, the Canadian fighter was released from the UFC.

FanHouse recently spoke to MacDonald about what went wrong for him in the UFC and his road back. Check out the full video interview below.