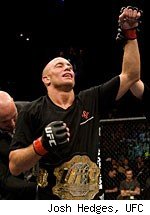 The Nevada State Athletic Commission has handed down medical suspensions to thirteen out of the 22 competitors following Saturday's UFC 100 event in Las Vegas.

UFC welterweight champion Georges St. Pierre has been suspended until at least Aug. 11, 2009 and must have his right groin cleared by a doctor or else the suspension will be extended until Jan. 8, 2010. The injury occurred when opponent Thiago Alves pushed down on St-Pierre's knee while St-Pierre was in guard. St. Pierre heard a pop and immediately knew something was wrong, but with adrenaline masking his pain, St-Pierre went on to win every single round for the unanimous decision.

UFC newcomer Yoshihiro Akiyama was also asked to receive further medical attention to avoid his suspension from extending until Jan. 8. To be allowed to compete beginning Sept. 10, Akiyama must have his left orbital fracture cleared by an ophthalmologist (eye specialist).

As the recipient of the Knockout of the Night by way of an overhand right by Dan Henderson, Michael Bisping was given a two-month suspension and is not allowed to have contact until Aug. 26.

Jim Miller is required to have an X-ray and have a doctor look over his right shoulder and clavicle or he'll be out until Jan. 8. Miller won a unanimous victory over Mac Danzig, who has been suspended until Sept. 10 for a cut suffered in the fight.

Shannon Gugerty must see a doctor for his lower back pain or he'll be suspended until Jan. 8, 2010.

Here are the rest of the suspensions: