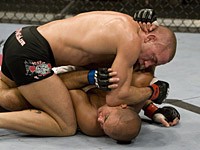 Georges St. Pierre has, in his last five fights, avenged his only two career losses and beaten the three toughest opponents the UFC could find for him. He's dominated all five fights, winning all 18 rounds. So what's next for GSP?

Take a look after examining my list of the Top 10 welterweights in MMA.

St. Pierre has already beaten Fitch, Alves, Hughes and Koscheck, and none of them have done anything to earn a rematch. Shields fights for Strikeforce, so he's out of the equation. And that leaves us with Swick and Kampmann. They will fight each other at UFC 103, and UFC matchmaker Joe Silva seems to view that as a No. 1 contender match. So look for Swick or Kampmann to take on St. Pierre, likely in December or January.

And look for St. Pierre to dominate either one of them. St. Pierre is so much better than the rest of the welterweight division that I'm a little worried he could make the whole weight class boring: If Alves and Fitch can't seriously challenge GSP, then I don't see why Swick and Kampmann would, either. I really hope GSP's next couple fights don't look like Anderson Silva's last couple fights, but I worry that when a champion doesn't have any significant challengers, that's what happens.