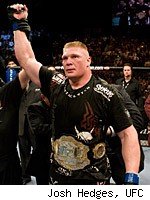 Brock Lesnar's destruction of Frank Mir at UFC 100 means the heavyweight division in mixed martial arts shapes up like this:

1. Lesnar is clearly the best heavyweight in UFC, but not in all of MMA.
2. Fedor Emelianenko will take on Josh Barnett at Affliction Trilogy on August 1 for the generally recognized heavyweight championship of MMA.
3. Everyone wants to see Fedor (assuming he beats Barnett) take on Lesnar.

So will Fedor vs. Lesnar happen? Dana White says it will, but I'm skeptical that Fedor will ever agree to the UFC's contractual terms. That's a real shame.

But that doesn't mean we won't get to see Lesnar take on some Top 10 opponents. I think his next title defense will come against either the Randy Couture-Antonio Rodrigo Nogueira winner or the Shane Carwin-Cain Velasquez winner. That means the UFC has three more fights between Top 10 heavyweights on the horizon. It just doesn't have No. 1 vs. No. 2.