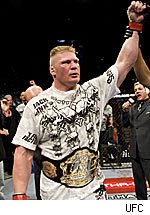 In workplaces around the country, and indeed around the world, Monday morning water-cooler talk following the weekend at some point turned to UFC 100.

And of course, those conversations eventually moved to UFC heavyweight champion Brock Lesnar, who scored a second-round TKO over Frank Mir, and then outraged some by his post-fight comments and actions. Around the World Wide Web, Lesnar was one of the most written-about topics.

And the interest wasn't simply around his win. People wanted to know about his WWE background, his wife, his quick rise to the top, and of course, what is next for him. And all that interest just serves to help the heavyweight division.
More From Bleacher Report: Is Lesnar Best Heavyweight in UFC?

Lesnar, who is alternately hilarious and shudder-worthy in his comments, has become a polarizing figure. Some love him and some hate him, but massive numbers of people want to watch him. UFC President Dana White virtually guaranteed that the winner of UFC 104's Shane Carwin vs. Cain Velasquez matchup would get the next crack at Lesnar.

Both men are unbeaten and have amateur wrestling pedigrees that rival Lesnar's, making for intriguing possibilities.

With all due respect to Velasquez, who is clearly one of the marquee prospects in the sport, a Carwin-Lesnar matchup would capture many imaginations because of the sheer size involved. Both men are 6-foot-4 and cut down to make the division's 265-pound weight limit. Like Lesnar, Carwin was a collegiate wrestling champion. He's unbeaten, has tremendous knockout power and has made scores of new fans with his recent performances. He's one fighter Lesnar would be unlikely to bully around.

And for those who prefer their athletes more refined, Carwin is undeniably bright, a full-time engineer to go along with his fighting schedule. Carwin has already showed a willingness to criticize Lesnar's boorish behavior. Writing on his blog a few hours after UFC 100, Carwin wrote, "The flipping off of the fans that just lined your pocket with millions of dollars is just LAME. He may be a Champion but he has a long ways to go before he earns the respect of a Champion."

But other possibilities remain. Velasquez would be no walkover for Lesnar, though at 6-foot-1 and 240 pounds, he's quite a bit smaller. Mir could soon work his way back into the last of a trilogy.

Of course, there is always the chance that someone else moves to the front of the line. The one fighter likely to do so is Fedor Emelianenko, who White continues to insist that the company will at some point sign. The Russian is scheduled to fight Josh Barnett at Aug. 1's Affliction.

"This whole Fedor thing has been going on and on and on," he said. "I keep saying this and that about him and he keeps waiting. Eventually, Fedor's going to be here. I want Fedor. I want him to come to the UFC and everything else."

Emelianenko will likely be a free agent following the Barnett fight. A source close to the fighter told FanHouse that Emelianenko's management team has had discussions with Affliction about re-signing, but do not anticipate having anything finalized before his fight. That could give the UFC a chance to swoop in and make another run.

Though Fedor would be free to negotiate elsewhere, he will continue to have a pre-existing promotional deal with M-1 Global -- not coincidentally, an organization fronted by his manager Vadim Finkelstein.

White says that as long as they can sign Emelianenko to a multi-fight deal, he would immediately fight Lesnar. And given their schedules (Lesnar fought July 11, Emelianenko is set to compete on Aug. 1), the UFC could easily slot a Lesnar-Emelianenko matchup in November or December. (By comparision, Velasquez and Carwin won't fight until late October, and the winner will likely need another three months to prepare, making a fight with Lesnar unlikely until 2010).

Would a Barnett win put him in the mix? Althought White recently said, "I don't know. No one's beating down my door to get Barnett," a victory could perhaps ignite an interest on UFC's part.

But the heavyweight interest doesn't end there. As FanHouse reported during UFC 100 weekend, Mirko Cro Cop has returned to the fold with a three-fight deal signed last Friday night.

Finally, the upcoming season of The Ultimate Fighter boasts a crop entirely composed of heavyweights, including Kimbo Slice. While there may not be a challenger for Lesnar in the crew, the addition of the still-popular Slice gives the UFC another lightning rod for what has quickly become a must-see heavyweight division. The company is expecting to be the upcoming season of TUF to be the higest-rated season ever.

Brock Lesnar may be the king right now, but in a land of giants, heavy is the head that wears the crown.