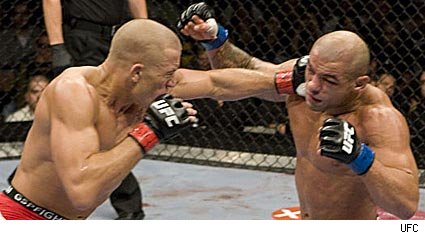 Georges St. Pierre showed once again at UFC 100 that he's by far the best 170-pound fighter in the world, and he showed a lot more than that: He showed in his preparation for his fight with Thiago Alves, in his decisive victory inside the Octagon, and in his class and dignity after the fight that he's everything a champion should be.

How smart is St. Pierre? So smart that he concocts the most carefully crafted game plans of any athlete in any combat sport, and he methodically carries them out, every time. St. Pierre knew Alves was more dangerous on his feet than on the ground, so his game plan involved a lot of takedowns, and he landed them over and over and over again. St. Pierre trains with a purpose for every fight, and that training shows up in the Octagon.

How tough is St. Pierre? So tough that he didn't even flinch when he heard his groin muscle tear during the third round when Alves was on top of him. Instead he just patiently continued fighting on the ground, regained his composure, and executed his game plan.

"It's pretty bad," St. Pierre said after the fight of his injury. "It happened in the third round, when I was in the bottom, he pushed my leg down, and I heard the noise of my groin, my abductor, snap. And I was thinking, 'Oh, my God, the fight is not even over and I'm on the bottom.' ... I ended up scrambling, getting up and winning the fight." 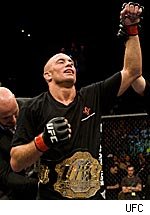 How good is St. Pierre? After all three judges gave him all five rounds of Saturday's fight, he has now won every round of every fight for five consecutive fights, against probably his five toughest opponents: Matt Hughes, Matt Serra, Jon Fitch, BJ Penn and Thiago Alves. That left UFC announcer Joe Rogan wondering

How classy is St. Pierre? So classy that when Rogan asked him after the fight to talk about his dominance of the welterweight division, St. Pierre instead praised Alves.

It's impossible not to contrast St. Pierre to Brock Lesnar, who, after winning his heavyweight title fight, taunted his fallen opponent, made obscene gestures to the fans and talked about his plans to get on top of his wife. To his credit, Lesnar apologized in his post-fight press conference. St. Pierre, however, is the type of athlete who doesn't have to issue public apologies because he doesn't make public spectacles of himself. He just trains hard, fights hard, and wins. That's a champion.

Brock Lesnar, right, gets in Frank Mir's face after their heavyweight title bout at UFC 100 at Mandalay Bay in Las Vegas Saturday, July 11, 2009.


Quotes of UFC 100
"I apologize to Bud Light. I'm not biased, I drink any beer. And tonight I'm drinking Bud Light all night." -- Brock Lesnar, at the post-fight press conference, trying to make peace with one of the UFC's major sponsors after saying in the Octagon that he was going to drink a Coors Light because Bud Light doesn't give him any money.

"I want to apologize. I acted very unprofessionally after the fight. ... I screwed up and I apologize. I have nothing against Frank." -- More Lesnar, acknowledging he was wrong in the way he addressed the fans and Frank Mir.

UFC 100 Awards
Fight of the Night: Yoshihiro Akiyama vs. Alan Belcher, a good three-round fight to get the night started.

Knockout of the Night: Dan Henderson, of course, for knocking Michael Bisping cold.

Submission of the Night: Tom Lawlor, who choked out CB Dollaway with a guillotine in less than a minute.

Akiyama, Belcher, Henderson and Lawlor each get $100,000 bonuses.

Good call: I agree with judge who gave Akiyama a 29-28 win over Belcher; that's how I scored the fight. I've been surprised by how many people are saying Belcher was robbed in his split decision loss, as I saw it as a close fight that Akiyama narrowly won.

Bad call: The UFC should have mentioned on the pay-per-view broadcast that it had moved the Jon Fitch-Paulo Thiago fight to the end of the night. The last-minute change in schedule, done to ensure that everyone would see the Lesnar-Mir fight in its entirety before 1 AM ET, confused some fans. 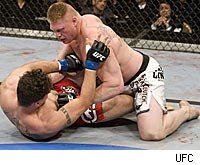 Ground game: Mir is so comfortable in his Brazilian jiu jitsu that even when he had the 275-pound Lesnar on top of him, he looked calm and relaxed. He wasn't able to use his jiu jitsu, of course, and he was eventually pounded out, but it's remarkable how confident Mir is on the ground, even against a monster of a man who was an NCAA heavyweight champion wrestler.

Stock up: Mark Coleman, who beat Stephan Bonnar in an undercard bout between two UFC legends who are past their primes. "That's why I do this!" Coleman screamed as he walked back to the Octagon. "No feeling in the world like this!" Coleman is in his 40s and will never be a champion again, but I still enjoy seeing him fight. Congratulations, Mark.

Stock down: Paulo Thiago, who came into his fight with Jon Fitch undefeated, but came out of it with a loss, looking lackluster in the process.

Fight I want to see next: Brock Lesnar vs. Fedor Emelianenko. That's the heavyweight fight that has to happen, assuming Fedor wins his August 1 fight with Josh Barnett. In a great piece of news for MMA fans, UFC President Dana White said after UFC 100 that he expects it to happen. Please, Dana and Fedor: Put your differences behind you and give us the biggest fight in MMA history.