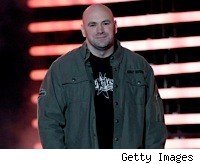 LAS VEGAS -- The lights were off in the Mandalay Bay Events Center, the crowd had moved on to the Strip's casinos with UFC memories fresh in their minds, and the fighters had dispersed -- some to their after-parties, others to the hospital. But deep in the bowels, in the last place he needed to be, Dana White remained.

Bleary-eyed but triumphant, White couldn't let UFC 100 weekend go, though there were other places he'd rather be. Tucked away in a conference room, he answered reporters' questions, one after another. The questioner's accents told the story of success the UFC has become. Media came from Japan, Canada, the UK, Germany and other far-off lands, with the UFC passing out over 240 credentials to the event, a record.

And at the center of it all, fittingly, was White, the seemingly indefatigable, polarizing ringleader who ostensibly through force of will moved the UFC from sideshow spectacle to booming sport.
Coming Soon: Brock vs. Fedor? | Full UFC 100 Coverage

Admittedly, he has never been one for nostalgia, and even upon being asked what his favorite part of UFC 100 weekend was, his answer was more practical than reflective.

The fights finished off an exhausting week for White and his staff, who concurrently put on the first Fan Expo in company history (it was a hit, drawing somewhere around 40,000 fans according to one company estimate), worked on a solution to get UFC 100 shown in the UK after its broadcast partner Setanta Sports collapsed, and put on the biggest card in company history.

The weekend was designed to be a celebration of the UFC (it was), but in a sense, it was also a celebration of White, whose identity has become interconnected with the company he helped build. He is its constant face, its most visible mouthpiece and if necessary, its top carnival-barker.

This is to take nothing away from the fighters, who were of course the building blocks, but White has been its foundation, unshaken through hard times and taken for granted when things have gone well.

Brock Lesnar, right, gets in Frank Mir's face after their heavyweight title bout at UFC 100 at Mandalay Bay in Las Vegas Saturday, July 11, 2009.


Once upon a time, remember, the number of fighters on the press conference dais outnumbered the number of media asking questions. But White's candidness and availability made him an effective pitchman. The more you talk to him, the more you get his passion, the more open it makes you to take a closer look. It took a long time for most media to come, and make no mistake about it, there are still many who aren't yet along for the ride, but the numbers can't be denied.

$5.1 million for the live gate, 11,000 in the stands, likely over 1 million pay-per-view buys. That last number would make UFC 100 the biggest PPV buyrate of the year, bigger than UFC 94, bigger even than Manny Pacquiao-Ricky Hatton. And here are a few other numbers, these from the grassroots movement:

All in all, a pretty successful evening. But in his blue-collar style, White won't take much time to dwell. After a brief rest, it will be right back to work. UFC 101 is less than a month away after all, and the hype machine never runs out of gas.

Of course, it's not all wine and roses. Controversy often seems to find White, and his unwillingness to dull his sharp tongue makes him an easy target. Many people think he puts himself in the spotlight too often, and others just think he's overexposed. And as the media's knowledge of the sport grows, the questions will get harder, the spotlight will get hotter.

In the post-fight press conference, he had to answer questions about Brock Lesnar's behavior, whether he'd ever be able to sign Fedor Emelianenko, and the messy, off-again, on-again courtship of Mirko Cro Cop (which by the way is on again; he's signed to a three-fight deal).

"The only thing I know for sure every day is that something will go wrong," he said with a tired smile. "Every day, something's going to go wrong."

But at his base level, White is a promoter with the heart of a fight fan. He still dislikes the idea of doing a stadium show because he feels fans with upper-deck seats in a 50,000 seat stadium won't get the full "UFC experience." He admits the company will likely do it in Hawaii, but only because of a lack of venue choices.

And he remains proud of the way his fighters socialize with fans. If you walked around the Mandalay Bay this week, you were virtually guaranteed a chance to meet, take a picture with, or get an autograph from UFC stars, both past and present. 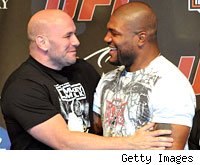 Randy Couture, Royce Gracie, Rashad Evans, Rampage Jackson, they were all here, along with dozens more.

"If you go to a Lakers game, you're not meeting Kobe Bryant," he said. "If you come to a UFC event, your favorite fighter, there's a good chance you're going to meet him. And as long as I'm here, it'll always be like that."

And White practices what he preaches. Accessible to the end, he's at times taken two hours to walk 100 feet while stopping for autographs. He shakes hands. He takes pictures. If it leads to making a fan for life, he'll do it. He preaches the UFC gospel, converting the masses one at a time. Regardless of whether you love him or hate him, you have to respect him for that.

Which leads us back to the beginning, White among a cluster of media, long after the event was over. He was clearly exhausted, thinking nothing could be more exciting than the landmark event he'd just produced except for his bed.

After 30 minutes, a public relations director tried to bail him out. The local ESPN Radio affiliate wanted White for an interview. He could go on for 10 minutes and call it a night. Or he could just sneak out a side door. No one could blame him for leaving.

"I'll stay here as long as they want," he said. "It used to be two reporters here, and now we have this many. I'll stay here and answer everything they got."

More time passed by, more questions asked. One by one, reporters began to fall away from the pack, and eventually, there were no more questions to be asked. Dana White smiled at the remaining group and thanked them for their time. Then he rubbed his eyes and closed the door on UFC 100 weekend. The clock was nearing midnight, and Groundhog Day was fast approaching.