LAS VEGAS -- Brock Lesnar walked into the UFC less than 18 months ago with little more than a scant few months of training, a wicked tongue and an unshakable faith in his physical gifts. And even after losing his UFC debut to Frank Mir, he was the organization's heavyweight champion within nine months.

And now, after avenging that loss to Mir, the world will start to wonder just who can stop the goliath king. Lesnar dominated Mir from start to finish in scoring a second-round TKO at UFC 100.

Brock Lesnar, right, gets in Frank Mir's face after their heavyweight title bout at UFC 100 at Mandalay Bay in Las Vegas Saturday, July 11, 2009. Click through to see more exciting fight action from UFC 100.

Brock Lesnar screams to the crowd after retaining the UFC heavyweight title against Frank Mir at UFC 100 on July 11, 2009 in Las Vegas, Nevada.

"Frank Mir had a horseshoe up his ass, I told him that a year ago," Lesnar said shortly after winning. "I pulled that SOB out and beat him over the head with it."

The comments, like many others, didn't win the champ any favor with the crowd, who gave him a mixed reception upon his entrance, but showered him with boos after he continued his verbal barrage at Mir seconds after the fight was called, with Mir on the mat bloodied and hurt.

The behavior enraged Mir's corner, including his father, who screamed at Lesnar from behind the cage. The sold-out crowd at the Mandalay Bay Events Center also let their disdain be heard. Neither seemed to bother Lesnar, who flipped the crowd the double-bird before the final decision was announced. 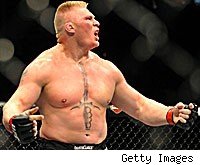 Lesnar might have won a few fans back after intentionally badmouthing one of UFC's major sponsors. "I'm going to go home and drink a Coors Light," he said, then repeated, "Coors Light, because Bud Light wont pay me nothing."

It should be noted Lesnar came into the post-fight press conference with a Bud Light. He also apologized for his behavior, saying he let his emotions get the best of him, and that he had no problem with Mir other than that he held a grudge against Mir for beating him the first time.

Mir actually started off the second round strongly, landing a hard left, a knee to the body and a knee to the head. But on the last of the moves, he slipped, giving Lesnar an opening to take him down. From there, Lesnar controlled Mir and pounded him with punches from the side. Mir blocked the first few, but Lesnar kept firing and eventually penetrated the defense with bad intentions. After a long series of strikes, referee Herb Dean stepped in to stop the contest at 1:28 of the second round.

Mir, who came into the contest as the UFC interim heavyweight champ after beating Antonio Rodrigo Nogueira, left bloodied and bruised.

In the welterweight championship match, Georges St. Pierre overcame Thiago Alves' kickboxing prowess by keeping him in a position where he couldn't use it: on his back. GSP managed takedown after takedown in grinding out a five-round decision over the young but game Brazilian striker.

St. Pierre (19-2) easily received the largest ovation of the night during his pre-fight introduction and heard the fans chant his famous initials several times throughout the 25-minute systematic win.

Afterward, St. Pierre said he suffered an injured adductor muscle during the contest, but was able to plow through. Now, the next question for the Montreal native is whether or not he will move up in weight class to challenge middleweight kingpin Anderson Silva. It didn't sound like he was in a rush to do so.

"It's a question of timing," he said. "I walk around at 185 pounds, that's not that big for a welterweight. Tonight, I'm 185-184. I don't fight to become champ anymore. I am champ. Now, I fight for a challenge. I would have to take the time to gain weight and take care of business."

While GSP decides which worlds to conquer, Alves will be left to pick up the pieces and restart the streak that got him to be a No. 1 contender in the first place. Alves came into the fight in fantastic shape and was still breathing well when the fight finished despite sustaining a series of cuts and bruises on his face throughout the duration of the bout.