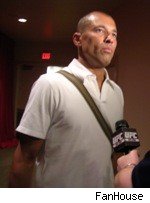 LAS VEGAS -- Of all the men walking around the grounds of the Mandalay Bay this weekend, looking over the sports goliath that the UFC has become, few can appreciate just how long the journey has been like those that have been there from the very beginning. And few have been there since the beginning.

Not Dana White, not Randy Couture, not Chuck Liddell.

But Royce Gracie, he can remember back to the cramped locker room at McNichols Sports Arena in Denver, Colorado on Nov. 12, 1993. He can remember the sights and sounds, recall the emotions and the spectacle that transpired and began the voyage to add a new item to the world's sports menu.

"The sport grew so much, but coming from Brazil I knew it was going to happen," Gracie told FanHouse. "In Brazil everyone knows this type of fight. It just took time and education. In the beginning, people thought it was super-violent and said, 'Let's ban it.' No. It's a question of education. We had to show people through time that it's a sport."

In the beginning, it wasn't so much sport as spectacle. There were no weight classes, few rules and distinct styles clashed, sometimes quite awkwardly (Art Jimmerson and his one boxing glove). But in Gracie, the sport – then called vale tudo or No Holds Barred, found an unlikely hero, a wiry 6-foot-1, 178-pounder who looked like he had no place in such an event. It seemed obvious, logical really, that the unfettered cage wars would favor behemoths. Instead, the smallest man in the field won his three matches in a combined time of less than five minutes, dropping jaws and inspiring thousands of viewers to investigate what to most was a new and mystical art: Brazilian jiu-jitsu.

The revolution had begun, and most had no idea. But Gracie did.

While Gracie does not consider himself officially retired, neither is he actively searching out matches, telling FanHouse, "I get approached all the time. I just have to say, 'Set up a show,' and I can fight. That's easy. But I don't really have that urge to fight, that anger to fight."

At 42, Gracie is still younger than Couture, as well as Mark Coleman, who is competing at UFC 100. But although he hasn't officially called it a career, he seems as though he's at peace with the fact that he might have fought for the last time.

"There is nothing on the schedule. I'm not looking, but anything's possible," he said.

Gracie still spends time watching today's fighters, and appreciates the fluid movements of fighters like Georges St. Pierre who effortlessly transition positions and continue to push boundaries on what a fighter can do.

"He knows how to use strategy," he said. "I always like to look at his fights. I appreciate how he fights. I like guys like him, Demian Maia, Anderson Silva. Guys that use strategy to fight."

It only seems right that during UFC 100 weekend, Gracie returned to his roots. Despite the positive steroids test that he submitted in 2007 -- a result he still disputes -- he returned as a conquering hero. He tried to walk around the floor of the convention center to see the Fan Expo before quickly realizing it was simply not possible. He was mobbed everywhere he went.

But he happily signed autographs and took pictures with fans at a PRIDE booth, and reveled in the success of something he helped build. The attention was no surprise to him. He'd faced it from the minute he touched down in Las Vegas.

"The energy started when I stepped out of the plane [Thursday] night," he said. "People said to me, 'Oh man, you're here!' From the plane to the hotel, it's been non-stop."

Whether or not he ever steps back into the octagon or any cage to fight once more, Gracie can rest knowing that in the history of MMA, he will always be the fighter who most influenced the sport's future growth.

On Nov. 12, 1993, he stepped into a cage fully believing that he would win and show the world a new art. All these years later, he can stand among the throngs and take pleasure in the fact that his mission was indeed accomplished.