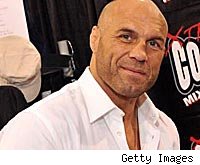 LAS VEGAS -- Fresh off a major role in the upcoming action film The Expendables, Randy Couture is back in training in preparation for his UFC 102 main event matchup with fellow heavyweight legend Antonio Rodrigo Nogueira.

Couture, who spent several weeks making the film with writer/director/actor Sylvester Stallone, Mickey Rourke, Jason Statham, Dolph Lundgren, Jet Li and a cast of others, has his mind firmly on his own bout, but the UFC Hall of Famer also shared his thoughts concerning Saturday night's UFC 100 heavyweight title fight between Brock Lesnar and Frank Mir.

"I'm not part of Lesnar's camp, so I don't know what his approach is," Couture told FanHouse. "I have my opinion. I think if I was Lesnar, with his wrestling background, the fight doesn't have to go to the ground unless he wants it to. So why not keep him up, make him stand with me?

"If I'm Lesnar, I'm thinking, 'I'm bigger, I'm stronger, I'm longer. Hopefully I've refined my striking skills to the point I can pick him apart and hurt him on the feet. Make him desperate to try to take me down and to the ground where I'm the best.'"

Couture, of course, has his own experience with Lesnar from which to draw. The multi-time champion suffered a second-round TKO at Lesnar's hands at UFC 91 last November.

And even though Mir has noticeably improved his striking, illustrated by his recent TKO of Nogueira – the first time the durable Brazilian has ever been finished – Couture thinks it's not a great idea for Mir to keep the fight standing.

"My striking's not bad either," he said. "That's a big SOB (Lesnar weighed in at 265 but will be rehydrated to around 280 at fight time; Mir weighed in at 245). Those are big canned hams coming at your head. I don't care how good you are. That's a lot of man and a lot of strength to go toe-to-toe with. You've got to try to tie him up and get inside his punches to deal with him. I still think it's a bad idea no matter how good you are to just stand in front of a guy that big."