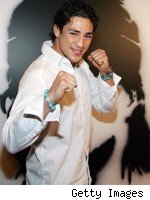 LAS VEGAS -- After Diego Sanchez defeated Clay Guida last month at the UFC's Ultimate Fighter 9 Finale, speculation began that perhaps Sanchez was in line to get the next crack at the lightweight title after BJ Penn and Kenny Florian finish their business at UFC 101 in August.

Now comes word from Sanchez himself that the UFC has indeed promised him that he will take on the Penn-Florian winner, likely later this year.

"This comes from Lorenzo [Fertitta] and Dana [White]," Sanchez told FanHouse during UFC 100 weekend. "They're flying me out to Philadelphia. I'll be sitting there ringside. I'll probably be in the ring afterward. It's on."

The 27-year-old Sanchez (21-2), said he hoped to fight Penn, citing his vast accomplishments as making him a better challenge. But during a fan Q&A prior to Friday's weigh-ins, Florian said he hoped to fight Sanchez as he hopes to avenge an earlier loss during the finals of the The Ultimate Fighter's first season.

Sanchez has only fought twice at 155, earning a decision over Joe Stevenson in the fight prior to the Guida win, but he says he has every belief that the decision will be career-defining in that the advantage of being the bigger man in the cage will play dividends.

"I feel I'm the biggest, strongest competitor at this weight," he said. "The same way Thiago Alves and Jon Fitch use their size and strength advantage in the ring at 170, that's what I'm going to do at 155. I've had two fights at this weight and I'm only getting better at the weight cut, getting better at this process and it's only a matter of time until I master it."