Vitor Belfort, Matt Lindland Have No Problem Putting Past Behind 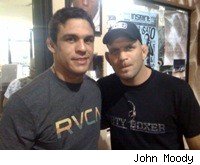 LAS VEGAS -- When we last saw Vitor Belfort and Matt Lindland in the same scene together, it was with the former separating the latter from consciousness at Affliction's last event, January's Day of Reckoning show.

Apparently, the two longtime MMA veterans had no problem putting the past behind them, as FanHouse obtained this photo of the onetime combatants together taken during UFC 100 week at the Xtreme Couture gym in Las Vegas.
Belfort is a regular at the gym and was finishing up his daily training leading up to his August 1 fight with Jorge Santiago at Affliction's next show when Lindland came in to help Dan Henderson put the last touches on his fight prep for his Saturday tussle with Michael Bisping.

The two shook hands and exchanged pleasantries before the photo was snapped. For all the grief MMA gets about being a violent sport, its detractors rarely get to see scenes like this, where fierce competitors put aside rivalry in favor of basic respect and decency.

Both men have careers dating back over a decade and have previously fought on the same card multiple times. Belfort was a onetime UFC light-heavyweight champion, while Lindland has been considered a top 10 middleweight for most of his career.

Lindland has no upcoming fight scheduled, but recently had a documentary about his life entitled "Fighting Politics" released.