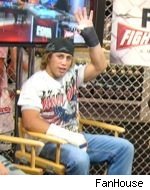 LAS VEGAS -- The growth of the UFC has been so explosive that the company rarely gets a chance to exhale before moving from one event to the next. Despite a horrid economy, the company has made major strides in the last four years, and has certainly earned the right to pat itself on the back.

It did so on UFC 100 weekend, putting on a Fan Expo that celebrated past, present and future.

The Expo brought a host of sponsors to the Mandalay Bay Convention Center, all showing how the business of MMA has grown. And the UFC brought its Grade-A stars. From Randy Couture and Rampage Jackson to Royce Gracie and Kimbo Slice, fans were virtually guaranteed to rub shoulders with MMA royalty while walking around the floor.

At the Silver Star clothing booth, Urijah Faber happily signed autographs despite having casts on both of his hands (Faber broke bones in both hands during his recent WEC featherweight title loss to Mike Brown).

"I'm getting really good at signing with the cast," Faber told FanHouse with a laugh. "It pretty much looks like my normal signature."

Faber told FanHouse that he has no timetable for returning to action, but said in the meantime, he was working on other aspects of his game.

"I'm going to have sick kicks by the time I get back," he said.

A Spike TV booth featured the contestants from the upcoming season of The Ultimate Fighter, including Slice, who of course drew huge crowds.

Slice said he found it difficult leaving his family to move to Las Vegas and tape the show, but didn't regret his decision.

"At the end of the day, it's like, if you want to be a fighter, prove it," he said. "You can fight anywhere else in the world and be a decent fighter, but if you're on UFC, you can prove yourself as a real ultimate fighter."

Showing that MMA is beginning to cross demographics in ways we never perhaps thought possible, among the attendees to the Fan Expo was Callaway Golf, who sponsored a booth to show off a new series of drivers.

Rampage Jackson, meanwhile, walked around the floor of the Expo looking like MMA's version of a pied piper, with huge crowds following him everywhere.

"It's beautiful to see all the people here for the sport," said Royce Gracie, who signed autographs at a PRIDE booth. "This sport's come a long way."