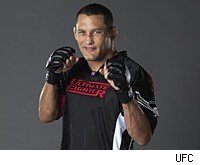 LAS VEGAS -- In Michael Bisping vs. Dan Henderson, the UFC has put together a classic matchup of one fighter steadily moving towards championship contention against another that has already scaled the highest mountains.

But is Bisping ready to take the next step in the journey to superstardom, or will Henderson be able to hold back the hands of time once more?

Let's take a look at how it's likely to play out.

From the time he appeared on his season of The Ultimate Fighter, Bisping immediately became a chosen one, a gifted, charismatic competitor with the potential to rally a whole nation behind him. Equally capable on his feet as well as on the ground, he showed a game that would make him a tough out for anyone. This is evidenced by his 7-1 record in the UFC (he's 17-1 overall, with the one loss coming via a controversial split-decision to Rashad Evans when Bisping was still competing as a light-heavyweight).

But in taking on Henderson, Bisping is taking a dramatic leap in competition level. Though as previously noted, he has faced Evans in the past, Evans was still in a developmental stage at the time, not the polished fighter we see today.

Henderson presents Bisping with numerous problems. He has powerful strikes, excellent wrestling and can easily overwhelm a downed opponent. He is without question the most complete fighter Bisping has faced.

The two facets of the game in which Bisping will possibly find an edge come in his striking accuracy and quickness. The Brit often sets a breakneck pace and is fast enough with his footwork to avoid power shots. That will be key against Henderson, who often ignores technical striking in favor of winding up for the knockout blow. Bisping won't be easy an target for such an attack.

If, however, Henderson can close the distance and establish the clinchwork he's known for, Bisping could find himself in some trouble. From that position, Henderson can work knees to the body, elbows to the head, or look for a takedown. It will also serve to negate Bisping's speed. It's a position he's likely to face on a few occasions, and how he handles it will be a key factor in who wins.

If Henderson takes him down, Bisping has proven himself very capable of finding a way to his feet in short order, but this time he'll have to do so against the highest caliber of wrestler.

Bisping's best chance of avoiding this conundrum rests in his aforementioned footwork. He's never been a one-punch knockout guy; instead he's a compiler that lets the totality of his attack pay dividends. If he can move into range, land a combination and get back out without sustaining damage, he may frustrate Henderson into getting sloppier. Henderson's head movement is average and he's a reachable target, but you risk the clinch every time you near him.

Adding to the interest, this fight has title implications. Should Bisping win, it's quite possible he will get the next shot against Anderson Silva after "the Spider" fights Forrest Griffin at August's UFC 101. If Henderson wins, however, who will be next? Henderson would love another crack at Silva, but it may not be a direction the UFC wants to go.

The outcome of this fight depends on Henderson's plan. If he chooses to stand toe-to-toe with Bisping, he might find Bisping's speed is too much. But if he plans to incorporate clinchwork and takedowns into his plan, he has an excellent chance to derail Bisping's hype train.

I suspect that Henderson senses a possible title fight, and will decide that roughing up Bisping is his best option for victory. Bisping's takedown defense is not one of his strongest points, and a motivated Hendo will put him on his back early and often, forcing "The Count" into a brawl that he'd rather avoid.

Henderson via decision is the most likely bet here, but Bisping, at +190 in the latest odds, is a very live underdog.