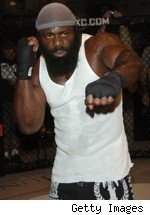 LAS VEGAS -- Kimbo Slice is picking technique over power in the UFC heavyweight championship clash between Frank Mir and Brock Lesnar at UFC 100.

"I dont like picking fights, everyone knows you can't pick fights, but you can go with who you think. I like Mir," he said. "I like them both, but the reason I say I like Mir is because he's a specialist.

"Brock got power," he continued, "but Brock got a lot of body that Mir can catch him with, so I kind of like Mir, man. I like Mir."

Slice made an appearance at the UFC Fan Expo at a Spike TV booth along with the rest of the fighters from the upcoming season of The Ultimate Fighter. Of course, he drew a huge crowd. The 35-year-old Slice hasn't fought since last October's loss to Seth Petruzelli in the EliteXC company finale. Ironically, Petruzelli was also among the massive turnout of fans, fighters and media at the Fan Expo.

He spoke in depth about his time in the TUF house and what he hopes to gain from it. Stay tuned to FanHouse in upcoming days for more on that, but in the meantime, Kimbo was happy just being a fan and seeing the circus surrounding the UFC during a banner weekend for the company in Las Vegas.

He even speculated on a wild ending that would put a cap on the festivities.

"It won't surprise people if Mir taps Brock out," he said. "That won't be a surprise. That's some people's expectations. But if Mir knocks Brock's big ass out, it's going to be pandemonium in there."