Carlos Condit vs. Chris Lytle on Tap for UFC Fight Night 19 in September 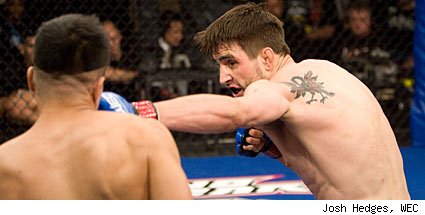 Final WEC welterweight champion Carlos Condit will look to bounce back from his UFC debut loss when he squares off against Chris Lytle at UFC Fight Night 19 on Sept. 16 in Oklahoma City, Ariel Helwani of FanHouse has learned.

Condit (22-5) is coming off a split-decision loss on the scorecards in his Octagon debut to Martin Kampmann at UFC Fight Night 18 in April, ending an eight-fight win streak that the Albuquerque native had compiled the last three years with the Pancrase and WEC organizations.For his UFC debut, Condit left longtime trainer Tom Vaughn at FIT NHB in Albuquerque for Arizona Combat Sports, a move that allows him to train alongside the likes of UFC competitors Ryan Bader and C.B. Dollaway.

A mixed martial arts veteran that continues to juggle a full-time firefighting career, Lytle (27-17-5) last month recorded a unanimous decision over Kevin Burns on the televised card of The Ultimate Fighter 9 Finale. Lytle in recent years has sacrificed health, and perhaps strategy, in support of an exciting stand-and-bang style that has garnered him numerous post-fight awards. When he steps in against Condit, Lytle could be looking at an unheard of fourth straight and fifth overall Fight of the Night award.