Brock Lesnar at UFC 100 Weigh-In: 'It's All Over but the Crying' 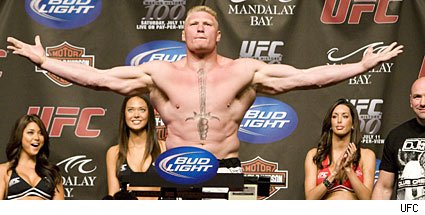 LAS VEGAS -- Only one thing stands between Frank Mir and one of the most unlikely comebacks in MMA history. Unfortunately for Mir, that one thing is 6-foot-4, 265 pounds (before rehydrating) and has a boulder rather than a chip on his shoulder.

With revenge on his mind, Brock Lesnar will attempt to stop Mir from becoming a two-time UFC champion at UFC 100 and complete a comeback from a career-threatening injury caused from a motorcycle crash.

The two heavyweights weighed in at the Mandalay Bay Events Center, and to no one's surprise, Lesnar outweighed Mir, 265 to 245. Mir looked preternaturally calm during his time on stage, laughing at Lesnar's pose on the scale and showing none of the menace that many fighters often display when facing their opponent for the last time before it really counts.
More: Kimbo Slice Picks Mir | Complete UFC 100 Coverage

"It's all over but the crying, baby. That's all I've got to say, so see you tomorrow night," Lesnar said before walking off the stage.

While Lesnar looked like his usual massive self (he'll probably be right around 280 at the opening bell), Mir looked as if he had re-sculpted his body in the time since we've last seen him, showing off washboard abs during his pose.

The weigh-ins drew one of the most boisterous crowds you could imagine for what is essentially a series of men stepping on a scale with nothing but shorts on.

Around 1,000 people were reportedly left outside as the Mandalay Bay Events Center configuration for the weigh-in filled to capacity.

Inside, Georges St. Pierre clearly came across as the biggest fan favorite of the night, drawing a standing ovation upon his entry before checking in at even 170 pounds for his welterweight title matchup with Thiago Alves. The No. 1 contender has had weight-cutting issues in the past and visibly exhaled upon stepping on the scale, but he too weighed in at 170, ensuring a title bout.

The first time the crowd rose above the ear-splitting and bleacher-rattling decibels emanating from the speakers was due to the entry of Dan Henderson, who weighed 185, one pound less than his opponent, Michael Bisping.

Bisping came in to a mixed reaction, but clapped his hands and spurred the crowd on to be even louder. During their staredown, Bisping glared at Henderson, who smiled back through the duration of the pose.

Perhaps the most intense staredown of the day came from rising light-heavyweight star Jon "Bones" Jones, who walked off the scale and stood nose-to-nose with opponent Jake O'Brien huffing and puffing without making eye contact. "A lookaway staredown," Joe Rogan called it.

The most comedic entrance came from middleweight Tom Lawlor, who paid tribute to the UFC's early days by painting "Just Bleed" on his chest and "UFC" on his head, copying a fan who did the same at UFC 1 and has lived on infamy through internet GIFs.

All 22 fighters on the card made weight. For complete UFC 100 weigh-in results, click here.