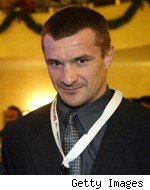 The seemingly endless saga of Mirko Cro Cop Filipovic's relationship with the UFC keeps getting more interesting, as it now appears that he's close to agreeing to return to fight Junior "Cigano" dos Santos at UFC 103.

That's quite a turnaround from what was being said about Cro Cop and the UFC last month, when Cro Cop returned on what was described as a verbal agreement, beat Mostapha Al-Turk at UFC 99, and then indicated he was set to sign with Japan's leading MMA promotion, Dream. Just hours after UFC 99 was over, UFC President Dana White was ripping Cro Cop as a traitor who had stabbed him in the back.

But it appears that Cro Cop vs. Cigano is close to happening. Cigano has been pulled from his previously scheduled UFC 102 fight, and MMA Junkie reports that it is because he's fighting Cro Cop on the September 19 UFC 103 card in Dallas.

If it happens, it's a very good fight. Cigano is 2-0 in the UFC and has shown off devastating punching power, needing just 1:21 to knock out Fabricio Werdum in October and just 54 seconds to knock out Stefan Struve in February. Cro Cop is a legend and Cigano is a young up-and-comer, and the winner of the Cro Cop-Cigano fight has to be considered a real player in the UFC's heavyweight division.

Although the UFC has not made an official announcement about UFC 103, the rumored card includes the following: