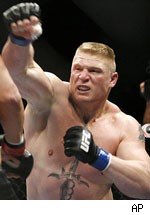 The UFC 100 heavyweight title match between Frank Mir and Brock Lesnar could not possibly have worked out better for the UFC.

First, there is the previous history between the two. Second, there is Frank Mir trying to ascend back to the top as the UFC champ (interim title notwithstanding) after his first run was cut short due to a motorcycle crash. And finally, the company gets to showcase two heavyweights as the main event of the biggest event in its history.

So how will it all go down? Let's take a look.
UFC 100: Previews and Predictions | Full Coverage

First off, the fact that this is a rematch makes for a marketable storyline, but that's where the significance ends. Don't think for a second that the previous result will have any bearing on what happens in the cage on Saturday night. Lesnar is a completely different fighter. It's been almost 18 months since their first go-round. Remember that at the time, Lesnar was incredibly green to the game. And though he is an extremely gifted athlete and fighter, the jiu-jitsu game is a tricky beast to master. Lesnar knew that he had a hole in his game, and has employed Rodrigo "Comprido" Medeiros to address the situation.

Medeiros' goal has not been to turn Lesnar into a submission machine, but simply to better understand positioning and stay out of dangerous spots. Because neither Heath Herring or Randy Couture have specialized in submissions, this will be the first time Lesnar may really be tested in that regard. Of course, he and his camp feel that he is more than ready for the challenge.

Mir, meanwhile, has the same level of faith that he can repeat his result if the two go to the ground. 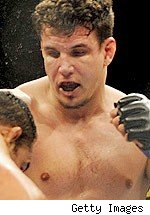 In his last fight, Mir showed vastly improved standup while battering Antonio Rodrigo Nogueira en route to scoring the first TKO against the Brazilian legend. Using combinations that emphasized uppercuts, Mir found a home for most of his punches.

Lesnar, however, has a vast reach advantage, and that could prove to be one of the biggest factors in the fight. Mir himself thinks so.

Mir has tried to prepare by bringing in two sparring partners who are 6-foot-7 and 6-foot-8, respectively, but he'll also have to contend with Lesnar's power; the champion also likely has a major disadvantage in that department.

So how is Mir most likely to win? The same way he won the first time around, by taking advantage of a Lesnar mistake on the ground with a submission. Given the tutoring Lesnar's undergone in the time since, there should be fewer opportunities available, though Mir is good enough to capitalize on whatever comes.

On their feet, it's hard to imagine Mir getting the best of Lesnar. Even with his improved standup, he's going to have to try to weave into and out of range to land shots and then move out of harm's way. But Lesnar is incredibly quick for a heavyweight, making that a tall order.

The interesting dynamic at play is whether Lesnar will dare to shoot a takedown and voluntarily put himself in danger. Obviously it's been a tactic he's employed in all his fights. Wrestling is in his blood and he may have to fight his own instincts and resist the takedown. But at some point, the fight is likely to go to the ground, and then things will get interesting. Will Brock try to pass Mir's guard, work from the half-guard or side control, or pull away and let Mir up to his feet? His decision could swing the match.

If Mir loses, he will have pulled off an incredible career comeback. Less than five years ago, he was hit while riding his motorcyle, an impact that threw him 85 feet, broke his femur and tore all the ligaments in his knee. For a time, it appeared he may never fight again, and later, after he did come back, it seemed he would never be the same. He was depressed, and nearly broken. But slowly and surely, he healed his body and mind, and now he is on the precipice of a brilliant achievement.

And if he wins, what does that mean for Lesnar? Two losses to Mir will knock him down several notches on the contenders' ladder; there will be no public outcry for a third bout if Mir wins the first two. So in some ways, Lesnar has more to lose.

Still, storylines are nothing but details to pique interest. They are worthless once the cage door is closed. The previous fight between them won't matter, and neither will their much-talked-about pasts. The only that will matter is how far Lesnar's come along on the ground, and how good Mir's striking truly is.

In the end, it's likely that power trumps technique. Weight classes exist for a reason. Lesnar will outweight Mir by nearly 30 pounds come fight time. That wasn't so signficant in February 2008. But for the Brock Lesnar of July 2009, it will likely make all the difference.